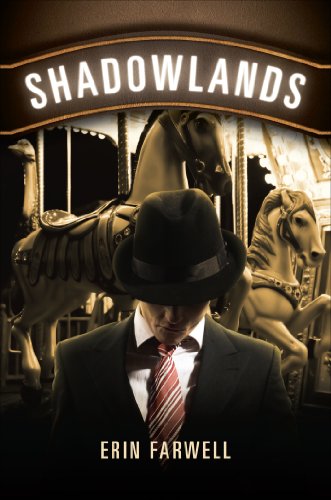 about this book: To know a place, a time, an era, write about them. I discovered the truth of this statement while I conducted research for my novel, Shadowlands. Set in 1927 in the town of St. Joseph, Michigan and the city of Chicago, I knew I needed to learn more about life in the 1920s. What surprised me was learning the small details of the area I grew up in. Although much of what I learned was not used in my story, I found myself becoming fascinated by a place I thought I knew.

For example, I knew that St. Joe hotels used to offer sulfur baths as a spa treatment. What I learned was that Eleanor Roosevelt and Duncan Hines were frequent patrons. While I knew that Lake Michigan has always been a significant part of the landscape, I discovered that Charles Lindbergh used it as a practice grounds for flying over the ocean and would frequently waggle his airplane wings at the patrons on the St. Joe beach. Although I had driven on John Beere's Road hundreds of times, I hadn't known that it was named after a well-respected physician who served the rural community for many years.

The Silver Beach Amusement Park operated along the lake front from the 1880's until 1971. Located at the base of the bluff, with the St. Joe above, Silver Beach offered a variety of attractions enjoyed by patrons from both sides of the lake. The Shadowland Ballroom opened in 1927 and replaced the dance hall which was converted into a fun house. Larger and more luxuriously appointed than the dance hall, it was a hit with the park's guests but also with the bands. The acoustics within the round building were nearly perfect and many big-name bands played there simply because they wanted to hear their music in that environment.

For all of the innocence of St. Joe and Silver Beach, the 1920's were a violent time. Prohibition, enacted to reduce drinking and related violence, had the opposite effect. Al Capone had more political power in Chicago than any elected official. Rival gangs fought for control of alcohol, gambling and prostitution businesses and many people died as a result.

The protagonist in Shadowlands is Cabel Evans, a man of wealth who served as an officer in the Great War and returned damaged in spirit. A victim of shell shock, or PTSD as it is known today, he feels he is unfit for society and lives in isolation in his family's summer home on the bluff in St. Joseph. When a fellow veteran comes to call Cabel is forced back into the world to repay a debt of honor and find a girl's killer.

My hope is that readers will enjoy Cabel's story and come to know a place that is dear to my heart.