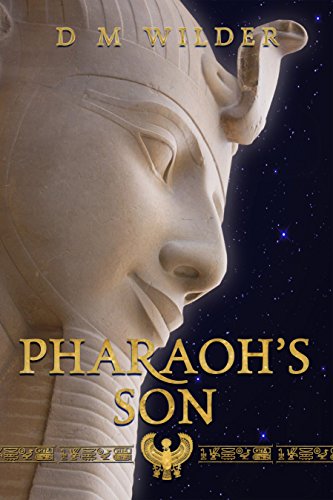 about this book: On the surface, this book is a twofold mystery: Why did someone make the huge statue fall? And what was hidden that they were after? Going deeper, it is about one man's transformation from selfish unhappiness to acceptance and generosity.

I saw a photograph of a huge, fallen statue in a tour guide and I thought, "Wow! That must have caused havoc when it went down!" I started mulling over what might have caused it, It was in front of a temple: what would have happened if it went down – say – in the middle of a festival throng. I had an idea of the main character, who was historic. Others stepped in – including the fellow who became the hero when I had intended him to be a quasi-villain – and the story took off. I enjoyed writing it over the next three years. PHARAOH'S SON is historical fiction with layers of mystery and a lot of action. It is set in ancient Egypt, and would appeal to fans of that time.

When chose a title for the book, I settled on PHARAOH'S SON because it is the literal translation of the ancient Egyptian title 'Prince': The story follows four specific princes, all sons of Ramesses II. Several other princes make brief, dramatic appearances, as well.

I studied ancient and medieval history in college, and did a lot of research into this story's time period. When writing it, I found that history wasn't sufficient for me. What did they wear? What did they eat? What is the climate like? And it was interesting to work my way through the various theories about who was whom.

I'd tell my readers to sit back and enjoy the romp – for, actually, that is what it is: a group of singular characters with varied pasts and hopes working together – sometimes contentiously – to solve a puzzle and right a wrong!

• "Historical mystery with a lot of meat to it" — JD, Amazon Reviewer

• "All in all, I'd recommend these books to people who love historical fiction, murder mysteries, treasure hunts and thrillers all mixed into a single novel. It doesn't get much better than having your cake and eating it too." — Pink Mo, Amazon Reviewer