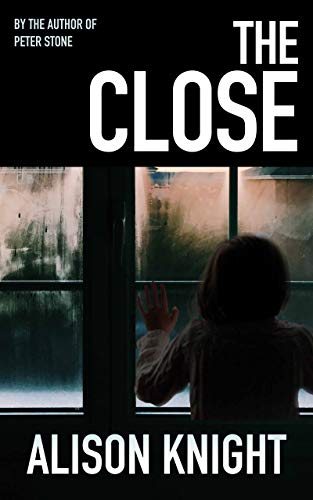 Book: The Close by Alison Knight

about this book: Set in the 1960s, in the northern English town of Broadfield, "The Close" reveals what lies behind closed doors on this seemingly unremarkable cul-de-sac. There's family tension, thwarted desires, domestic abuse - and murder. It would appeal to adult readers with an interest in mystery, period settings and family drama.

Seven-year-old Valerie Dean observes the furtive nocturnal activities of her neighbour from her bedroom window. One night, she sees him emerge from his garage clutching a woman's severed head. Convinced that Mr Oliver's a murderer, Valerie and her friends decide to spy on him. However, their investigations lead them into danger.

"The Close" was inspired by a number of vivid childhood memories. I remember my dad showing me a trap door concealed in our kitchen floor. It opened onto a deep shaft leading to an underground river. I decided to explore the Gothic possibilities of this recollection: what lies hidden – literally and metaphorically – under the carpet. I've aimed to create an oppressive, claustrophobic setting to intensify the unfolding narrative. The Close is peopled with nosy, gossiping neighbours living in close proximity, struggling with their own anxieties and secrets, both humorous and tragic.

I have also drawn on memories of bitterly cold winters, childhood games and tall tales, like the 'incurables' rumoured to be incarcerated in the basement of the Hall. In Valerie, I have tried to create a sensitive, intelligent child whose imagination is fuelled with sinister folk tales. The story charts her growing awareness of the secrets guarded within the Close – and those she might have wished to remain concealed.

• '…exudes a sense of claustrophobia which is effectively crafted through setting, characters and events…' — Alison Campbell Rate.

• '…a novel of complexity and substance…' — Clare Mendes.