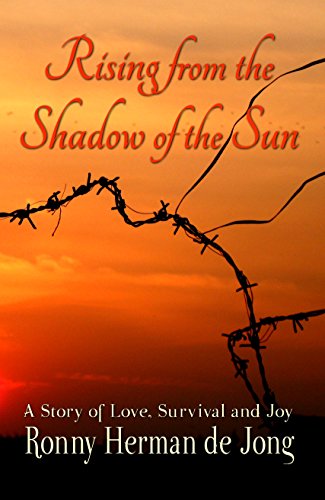 Book: Rising from the Shadow of the Sun by Ronny Herman de Jong

about this book: This year the world is remembering the 75-year anniversary of the end of the War in the Pacific: VJ Day. For almost four years, the Allied Forces fought the Japanese army, resulting in the ultimate surrender of the Japanese, days after dropping two atomic bombs on Japan. Many died.

RISING FOM THE SHADOW OF THE SUN, A Story of Love, Survival and Joy, gives the reader detailed information about the other side of WWII in the Pacific: the fate of civilians, who were kept in Concentration Camps all over the archipelago of the Dutch East Indies and the Philippines. The author's mother, Jeannette Herman-Louwerse, in a secret journal, gives an eyewitness account of life in a camp for women and children. Her husband, who escapes the camps, joins the Allied Forces; you will find his story along the same timeline in this book.

The JAPANESE WAR CRIMES FILES give the reader insight of the way the Japanese had planned their final victory in the Pacific War: by exterminating all remaining prisoners in all POW camps without leaving traces, commencing in September 1945. As it is, they had to surrender in August, after two atomic bombs were dropped on Japan.

The courage of a young mother, the love for her little girls, her determination to survive despite the suffering at the hands of the Japanese will fill you with awe and admiration. Read her story.