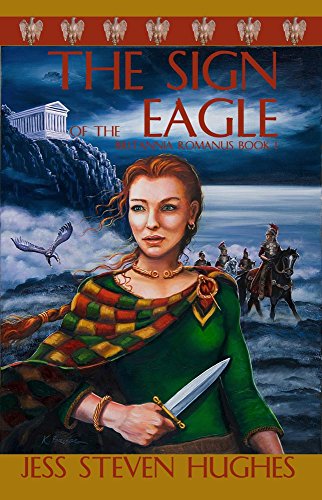 Book: The Sign of the Eagle by Jess S. Hughes

about this book: The Sign of the Eagle is an action-packed historical novel set in ancient Rome, 71 AD. Macha, the daughter of the legendary British Celtic King, Caratacus, is married to Titus, a tribune in the Roman Army. He is wrongfully accused of conspiring to kill the Emperor Vespasian and she must almost single-handed prove his innocence.

• "This is a full blown novel of ancient Rome that at times reminded me of Ecco's 'Name of the Rose.' Want to let that sink in? Yes, this is a real historical novel, not a romance in ancient clothing nor a gamer's how-to book. Good novels are rare, good historical novels even rarer." — Janet Morris, I THE SUN & THE SACRED BAND

I decided to write this novel because there have been so few written on Celtic women from the classical period. Boudicia and Cartimandua are about the only ones mention. Macha was a real woman whose father was Caratacus, the Celtic King who fought the Romans when they invaded Britain in 43 A.D. When he was betrayed and captured eight years later, Macha was only seven (we know this from Tacitus's Annuls of Imperial Rome). She went with her father in chains to Rome. He made an impassioned plea to Emperor Claudius to spare their lives. Cladius 'pardoned' them. She grew up and married into Roman nobility.

This is not a chick book. It is one that can be read equally by men and women who like historical fiction, especially, of the Roman period. This is what Fred Mench, professor of classical history at Middle Tennessee State University had to say about it: "A person who knows absolutely nothing about ancient Rome will enjoy reading this novel and painlessly learn about the First Century A.D. I liked it so much, I read it twice and enjoyed it even more the second time."

I wrote it off and on over a period of ten years. I really bore down the final three years after I retired (for the second time) at age 65. I belong to the Spokane Novelist Group who have been around more than fifty years and several members are published authors. The members kept trashing it until it met their satisfaction.

I came up with the title, THE SIGN OF THE EAGLE, because the eagle is the symbol of Rome and the Roman army. And it is the symbol that has Macha searching for clues that will prove her husband's innocence.

The cover was painted by my niece Katrina Hughes Brennan, who is a professional artist. Normally, Sunbury Press does not accept outside work, but they liked it so much they made an exception. I wanted to show a Celtic woman who had a determined look indicating she was not going let nothing stop her. She holds a knife because Celtic women were trained to fight in battle like their men. A temple is in on a cliff in the background with represents the classical period. The horseman are in the picture because she rides with Roman cavalry to the coast of Italy, which is prominent in the story. And we also see an eagle flying nearby. Some people have commented, Macha looks like actress Kate Blanchard. I had no idea who she was until after the novel was published. My niece painted the picture based purely on my description of the character.

The hardest part of writing the book was learning to write a novel as opposed to writing term papers and police reports. I am a retired police detective sergeant with 25 years experience on the Long Beach Police Department. I hold a Masters in Public Administration from the University of Southern California. I minored in Ancient Mediterranean Civilizations and have traveled extensively in that part of the world. I also have a private library of more than 1,000 books in classical, Celtic, Medieval and Mid-Eastern History.

I extensively researched this novel using more than sixty sources/books on the classical and Celtic period of the First Century A.D.

First of all, I learned how to write historical novels and that it cannot be rushed. I learned to develop a thick-skin from receiving criticism and rejections. Most of all, I learned even a greater deal about the First Century and how everyday people lived. Although customs and mores change, people are essentially the same no matter what period they lived. As a former U.S. Marine, I found many similarities between the Marines and the Roman army.

I want readers to know this is not a history book. I first want to entertain, but in a manner that they will learn some history and enjoy the story as well.

Video: The Sign of the Eagle by Jess Steven Hughes