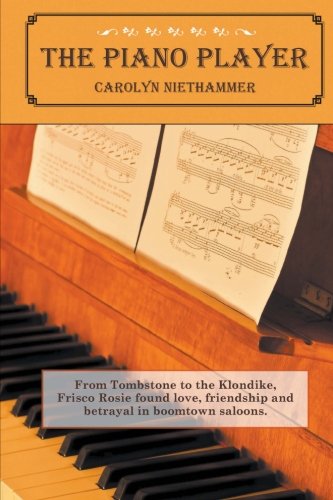 about this book: I am fascinated by the lives of women who settled the West – whether they are ranchers, homemakers or entrepreneurs. Thirty years ago, I began research on a biography of Irish immigrant Nellie Cashman who prospected and ran restaurants and boarding houses throughout the West, most notably Tombstone and later in the far north of Yukon and Alaska. I spent hours in darkened rooms reading microfilms of old newspapers and unpublished memoirs, and travelling to many of the places she lived including Dawson City in the Yukon. Despite my best efforts, there was a period of years I could not trace so I decided to give Nellie a friend and novelize the story. Eventually the friend took over and it became her story told as a memoir.

Mary Rose, a well-born young woman brought up in San Francisco, faces family reverses and travels to Tombstone in 1882 to seek her fortune. She gets a job as the piano player at the notorious Birdcage Theater. In becoming Frisco Rosie, she must adjust to her change in status and learn to live in a community of most men. Her landlady Nellie Cashman helps her and although the two women are very different, they form an improbable friendship. Years after they both leave Tombstone, they reunite to hike over the ice to Dawson City when gold is discovered in the Klondike in 1898. It is an arduous journey and they nearly perish. In pursuing their dreams, they postpone romance with the men who love them until for one it becomes too late.

The Piano Player brings to life the time between the end of the Civil War and the beginning of World War I, an important period of American history when the western states were being settled.