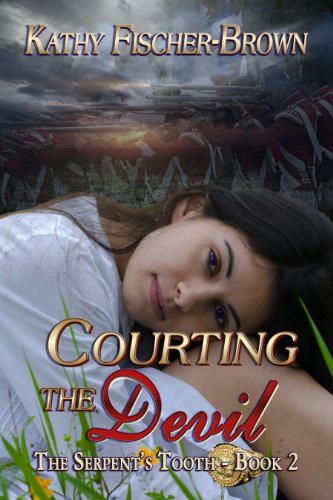 about this book: Courting the Devil, the second book in "The Serpent's Trilogy" of historical novels, picks up four years after the end of Lord Esterleigh's Daughter. The heroine, Anne Darvey, now lives and works as an indentured servant on a farm near Fort Edward in New York, where she tries unsuccessfully to forget the follies of her past. The war in the north approaches, and with it, the area is overrun with spies on both sides of the conflict.

During the American Revolution, people from all walks of life served as eyes and ears for their respective causes. Among their numbers were women. Although a few names have come down to us through history, no one knows exactly how many women worked behind the lines. In many cases, such as that of Agent 355 of the famous Culper Ring, we don't even know their real names. It's safe to assume that we may never know.

In the book, Anne's brutal treatment by Loyalists who have been misled into thinking she's a spy is in no way far-fetched. In fact, I saved her from a far worse fate, that suffered by the Canadian Tory, "Miss Jenny," at the hands of French soldiers in 1778. Under the pretense of seeking her father in their camp, she aroused suspicions and was arrested. Not only did her captors try to beat the truth out of her, they raped her. If that wasn't despicable enough, they cut off her hair—an act considered the height of humiliation at the time. (Miss Jenny, however, did not relent and successfully completed her mission. After returning to the British camp with her intelligence, she vanished from history.) It is also interesting to note that women, in general, were considered too "simple" to understand the complexities of a military campaign, and for the most part, were not taken seriously by either side.

4 Stars "…Courting the Devil is a high caliber historical drama. I commend Ms. Fischer-Brown on her research and attention to detail. It moves well with interesting characters and story lines ... Two thumbs up for Courting the Devil."
— Writer Wonderland