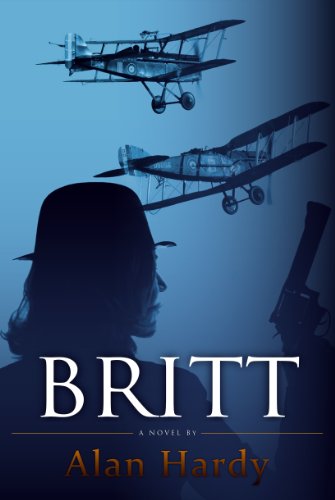 about this book: This is a book full of action, adventure, thrills, aerial combat, spies, etc., and also a fair bit of humor and, let's face it, sexual naughtiness...but it's more than that. As well as aiming to write a book which is exciting and titillating, I wanted to write about the anguish and terrors of growing up which afflict some people. The central hero, Wriggles, and the heroine, Britt, are a couple of innocents in a world of (to them) sexual depravity and corruption; they are childhood sweethearts, and both virgins, and the novel deals with their painstaking and painful attempts to come to terms with adulthood and their own sexuality. Britt in particular comes close to insanity in the trials and tribulations she suffers. I have set the story in World War One, in France, with Wriggles a Royal Flying Corps ace, and Britt a nurse just outside Paris; they are thrown together in the attempt to save England from defeat at the hands of Germany and a devilishly cunning spy ring operating in France. Only these two innocents stand between England and disaster. At the same time as fighting for England, they are also fighting to come to terms with a world peopled by degenerate harlots, dirty old men and suave sophisticates, and, maybe, just maybe, fighting to discover a future for themselves in that world, by achieving a measure of adulthood in coming together and feeling an emotion for each other that is more than child-like. In the end, I hope it's a tender and heart-breaking love story, and proof that even those who stumble at the threshold into adulthood can still, after all, have a chance.