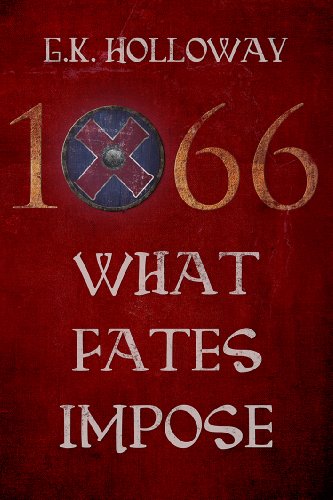 about this book: 1066: What Fates Impose, is about the end of Anglo Saxon England and the people caught up in the turbulent events of the time. It is history without the dust; drama without the histrionics.

After reading a biography of King Harold II, I became fascinated by the whole Anglo Saxon period in general and particularly the intrigues, conspiracies and assassinations that led to the Battle of Hastings. Drawing from many sources, including the Bayeux Tapestry, the Domesday Book, the Anglo Saxon Chronicles and the Icelandic Sagas of Snorri Sturluson, to name just a few, after years of research, writing and rejection, I finally found myself in print. A decade after I first started I had produced a historical novel that should appeal to anyone who loves history, especially the medieval period.

I believe the pre-conquest era is the most fascinating period in English history, easily as interesting as the Tutors. Henry VIII made an enemy of the Pope, so did Harold. Elizabeth had to fight off an armada, Harold had to defend the realm against two! And the scheming and backstabbing at court in Saxon times easily rivals that of Tudor England. But more importantly, at Hastings, England's history took a different direction with repercussions that echo down the centuraries. Amongst the many questions that spring to mind as a result of a battle fought so long ago is, 'just exactly how much are we in control of our own destiny?'

• "There's quite a bit of humanity in these pages but no sentimentality, and as a result, the frequently told story of 1066 comes alive again. An extremely promising debut - highly recommended." — Steve Donoghue, Historical Novel Review

• "If other authors can reach my emotions as Holloway did, then they will have done their job well." — Ellen L Ekstom, Whyte Rose & Violet, Scribes

• "A brilliant and entertaining novel of the events that led to 1066." — Glenn Cook, Amazon Hall of Fame, Top Ten Reviewer