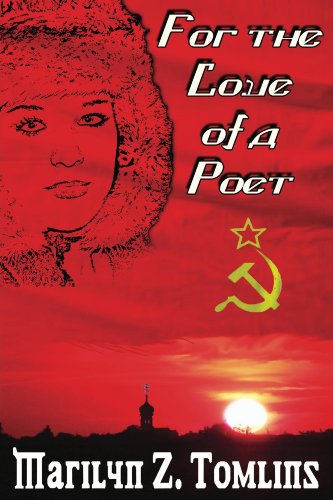 Book: For The Love of a Poet by Marilyn Z. Tomlins

about this book: 'For the Love of a Poet' is first of all an emotive love story, but the novel is also a walk down the corridors of history, corridors of which the walls are spattered with blood.

Currently, Russia and the Russian leader, Vladimir Putin, are on our television screens and on the front pages of our newspapers every day. Names like Kiev, Slavyansk, Donetsk, Kharkiv, Sevastopol, Crimea, Ukraine have become as familiar to us as the names London, New York, Paris, England, Germany, France.

Comparisons have been drawn between President Putin and Hitler, Hillary Clinton being one who had done so, so many of us fear that Putin is restoring the Soviet Union; that a new 'Cold War' is to commence; that an 'Iron Curtain' is to descend over Europe blocking off our 'free world' from Putin's reconstituted Soviet Union.

Why did the dancer Rudolph Nureyev defect to the West? Why could the poet and author of 'Dr Zhivago', Boris Pasternak, not collect his Nobel Prize In Literature? Why could 'Dr Zhivago' not be published in Russia? Why were books which we in the 'free world' could buy in any bookshop, banned in Russia and circulated only at illegal literary evenings?

In 'For the Love of a Poet' Tanya, based on a real person but whose identity I do not reveal but if you know Russian literature you will undoubtedly guess who she was, will take you by the hand and walk you down those blood-spattered corridors of the dreaded Soviet Union.

Tanya, young and pretty, meets the dissident and anti-Stalin poet Beretzkoy when he comes to the newspaper 'Pravda' where she works as a copy editor. She has been an admirer of Beretzkoy's poetry since her early teens, getting angry when her parents say she has a crush on him. Her feelings, she knows, are purer and deeper than a young girl's silly crush.

Tanya and Beretzkoy, a married man and the father of two sons, meet a second time at an illegal literary evening. He walks her home. Her home is a small room in a communal apartment in one of Moscow's ugly prefabricated 'Stalin marvels' buildings. The two bid each other goodnight on the sidewalk and she watches him walk away and as she writes: "I stand there and I watch until the footprints he leaves in the settled snow are filled with downy flakes of fresh snow."

A few days later Tanya, at her desk at 'Pravda', receives a telephone call from Beretzkoy: he asks if he could visit her in the evening. She says he can and he waits for her on the sidewalk outside her building. His shapka is pulled low over his forehead and she wonders whether he is seeking protection from the falling snow or from the prying eyes of her neighbors.

On a second meeting to her room the two become lovers.

Beretzkoy, years Tanya's senior, explains to her that he will only be able to visit her on Thursdays. He will never be able to spend the night. He also tells her about his sterile marriage, yet, that he will never leave his wife because of the guilt he feels for not loving her anymore. Tanya herself is not 'free': she is the wife of a man Stalin's secret police have arrested. It is a marriage in name only. She had offered to marry one of her 'Pravda' colleagues hoping that marriage to her would save him from arrest: her French-born father and her Russian mother had been political allies of Lenin and his Bolsheviks.

Tanya, having become a dissident poet's lover, is dismissed from 'Pravda'. As unemployment is a punishable offence in the Soviet Union, Beretzkoy teaches Tanya how to translate and interpret and she begins to work for the cultural attaché at the French Embassy: she is fluent in French. When she is also expelled from the room in the communal apartment, and has to move back in with her parents making it impossible for her and Beretzkoy to be alone together, he suggests she moves to the village where he lives: Zernoye Selo, the Village of Corn, named for the collective corn farm on the village's periphery.

(Beretzkoy too is based on a real person. As with Tanya, I also will not reveal his real identity to you, but if you know Russian literature, you will guess who he was.)