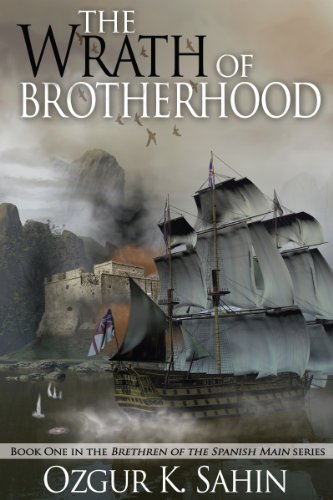 Book: The Wrath of Brotherhood (Brethren of the Spanish Main) by Ozgur K. Sahin

about this book: Want a good pirate tale with action, intrigue, and a vibrant historical setting? The Wrath of Brotherhood is the book for you!

The Caribbean of the 17th century was a sea in turmoil. As ongoing European conflict reached the beaches and jungles of the New World, the Spanish Main drew all sorts from honest laborers and religious refugees to scheming merchants to corrupt landowners. In this pioneer's paradise, where wits and guile were held in equal esteem to virtue and toil, Captain Roy Toppings steers his privateer crew between intrigue and invasion as he pursues vengeance for his sister's death.

The first book in the Brethren of the Spanish Main series, The Wrath of Brotherhood is set against a well-researched backdrop of the Caribbean in 1660 as the colonies awaited the new governance of both King Charles II of England and King Louis XIV of France. Alliances and loyalties change almost daily, and no one is quite as simple as they seem in this maritime adventure.