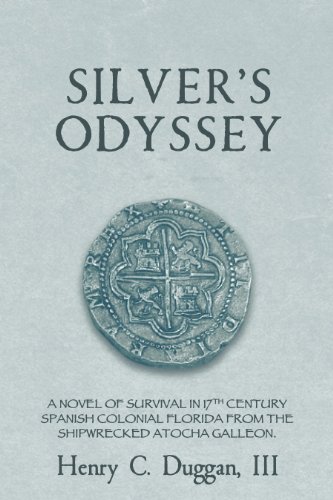 about this book: My love of history, geography, canoeing and writing inspired me to write a historical fiction novel. I had always wanted knowledge of Spanish history in Florida and researching for a novel became the best route.

The title, SILVER'S ODYSSEY, reflects the Spanish silver trade from the West Indies in the 17th century. The odyssey is the hero's trek across Florida in trying to survive after being tossed from his galleon during a hurricane. He carries with him several reals de a ocho minted in Peru.

Five years of research and writing produced this 2012 debut novel designed to be entertaining and educational. It's enticing for the adventurer in all of us, whether literal or armchair. Amazon has 101 Reviews with a 4.5 of 5 max rating. Rated PG, but with several swashbuckling fight scenes and a moderate amount of romance. About 1100 books have been sold to date.

A howling hurricane in 1622 tosses young Lt. Luis Armador overboard, washing him onto Florida's savage shores. Meanwhile, his silver-ladened Atocha galleon sinks at sea, with 260 going to a watery grave.

A desperate quest for survival now begins in the wilderness, amongst bold native Americans--a world few Europeans had confronted. Wrenched to have left his betrothed's pleadings in Seville, he now feels a sense of remorse, but realizes he must gird up for the coming physical challenges.

Indian slavery humbles him, and he becomes obsessed with escape. It comes, but with a price, as his fellow escapees meet misfortune. Pieces of eight, carried from the ship, become resentful reminders of his plight, and a mission to cache them in an underground stream almost takes his life.

Though surrounded by tremendous beauty in the New World, he suffers further grief, both at an Indian mission and then at St. Augustine. However, brandishing his sword, he is dauntless in his quest, while maturing in the process.