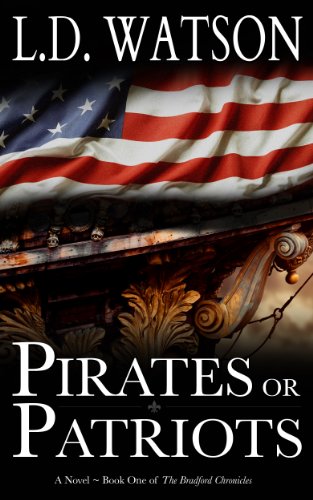 about this book: As the sun rises on the morning of September 16, 1814 the USS Carolina begins a cannon bombardment of a tiny Mississippi delta island. The purpose is to destroy the pirate empire of the notorious corsair, Jean Lafitte. Sixty-miles upriver a riot breaks out in a bustling New Orleans market as a young merchant is hauled off by United States Army troops. A few blocks away at a busy French Quarter sidewalk café a young girl hears gun shots as she patiently awaits the hero who will rescue her from life in a Bourbon Street bordello. And across the Gulf of Mexico twelve thousand war-hardened British marines prepare for their assault on the Crescent City.

In Pirates or Patriots seventeen year old Ephraim Bradford becomes instrumental in uniting the flamboyant pirate Jean Lafitte with the stoic general Andrew Jackson to save New Orleans from the British during the War of 1812. In the spring of 1814 Ephraim flees from service in the King's infantry to begin a new life in America. When his ship to the new world is seized by privateers Ephraim and his companions become conscripted soldiers in Lafitte's pirate enterprise. Charlotte Fuller is a small-town girl from Maryland who, after being stranded by an abusive husband, is forced into a life of prostitution. On a muggy New Orleans afternoon Ephraim and Charlotte find one another, but with a war brewing on the horizon the dreams of the two young lovers are shattered by cannonballs and musket smoke.