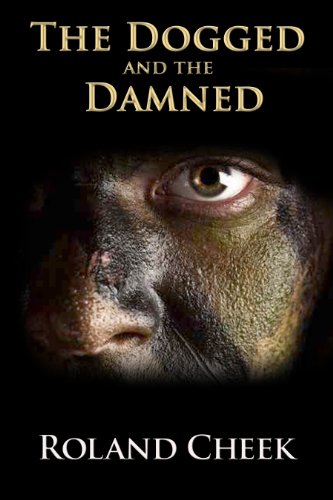 Book: The Dogged and the Damned by Roland Cheek

about this book: Oceans Apart—War At Home And Abroad:

After surviving the World War II carnage of seemingly endless New Guinea battles, then living through the slaughter of nearly all of his Company H comrades on a Moratai beach, Corporal Mikhail "Michael" Baranovitch had enough. He turned and deliberately walked back across the beach he'd earlier charged onto from the landing craft, and into the Pacific Ocean!

Miraculously he survived both the psychological breakdown and ensuing multiple wounds to be picked up by a rescue craft. Too, he survived a Court Martial charge of cowardice largely because of an already epic war record that included Silver and Bronze Stars, as well as multiple Purple Hearts.

Now the only thing left was to rehabilitate a tormented soldier retreating into the wilds of his own mind. All Michael Baranovitch dreamed of, however, was freedom amid those mountains and forests surrounding the U.S. Veterans Hospital where he was undergoing treatment. So he simply walked away from that, too.

Twice, Baranovitch was returned by sheriff's deputies. But during his last escape, he broke through a cordon of surrounding deputies, wounding one in the process. A "Shoot To Kill" order from the county sheriff resulted.

It's at this point we learn just how "crazy" the "Wild Man of the Umpqua" really was.