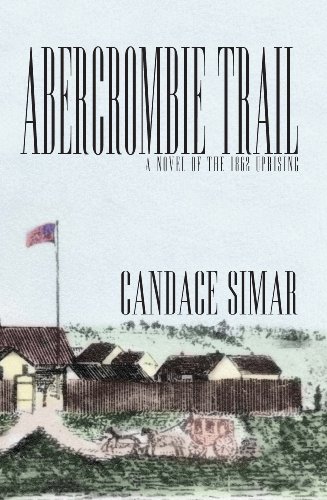 about this book: Candace Simar discovered that her great grandfather, a young Norwegian immigrant, drove the stagecoach from Fort Snelling (St. Paul, Minnesota) to Fort Abercrombie (Dakota Territory) in the waning years of the Civil War. This bit of family history led Candace to investigate the 1862 Great Sioux Uprising. Although the largest Indian War in United States history, this tragic Minnesota event remains mostly unknown because it happened between the bloody battles of Shiloh and Antietam.

Simar has since written The Abercrombie Trail Series: Abercrombie Trail 2009; Pomme de Terre 2010; Spur-Award winning Birdie 2011; and Spur-Award finalist Blooming Prairie 2012. These historical novels tell the family saga of Norwegian immigrants during the 1862 Sioux Uprising and later grasshopper plagues. Simar places her fictional characters in the real history of the region. Although fictional, her meticulous research and attention to detail make the experiences of early Scandinavians come alive on the page.

Writing this series was harder than Candace expected. She attended as many writer's workshops as possible to learn the craft of writing. She is grateful for the help and support she received from instructors at these workshops: Diana Ossana (co-writer with Larry McMurtry); Lisa Tucker; Robert Olen Butler; Josh Kendall; Sands Hall; Judson Mitcham; Maudy Benz; Brett Anthony Johnston; Will Weaver; Mary Sharratt; and Jonis Agee.

Appropriate for all readers seventh grade and older, The Abercrombie Trail Series has been described as Little House on the Prairie for Adults. Five Star Cengage purchased the large print/hard cover rights. Please request them from your library.

Candace is currently working on an historical novel about Minnesota farmers at the end of World War II. She spends her free time researching logging camps and bonanza farms.

Video 1: Farm Girls by Candace Simar
Video 2: Candace Simar tells us how she used her knowledge of history and storytelling ability to educate readers on the 1862 Sioux Uprising