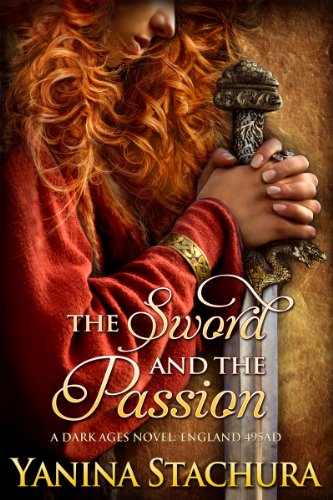 Book Review: The Sword And The Passion by Yanina Stachura

about this book: Ever since I was a little girl I have been writing stories about the past. I am from the north of England and as a kid I spent my summer holidays in places where the past still feels real - the dramatic Northumbrian coastline with its backdrop of ruined castles, Holy Island, the wild Yorkshire Moors, home to the Bronte sisters, and Whitby, where Bram Stoker set his famous novel Dracula. These places inspired me and set my imagination alight. So, when I finally sat down to write my first ever historical novel I knew it would be set in the north.

My book took nine months to research, it is set in the Dark Ages, 495AD, and, as the name suggests, very little is really known about that time in history. A lot of my information came from a book written by the Roman general Tacitus, one of the few people to write about the tribes of ancient Britain and Europe. It took three years to write in between earning a living as a journalist and I loved every minute of it. It was a joy. The story must have been inside me for a long time because I didn't plan any of it, it just came to me, everything just flowed.

The cover depicts my heroine Averil, a noblewoman who is enslaved when her family are murdered by treachery during a civil war. The sword she is holding belongs to her father and is exactly as it is described in the book. It was a great feeling to see my vision actually come to life on the cover which I really think captures the essence of the story - drama, love, passion, action and adventure.

I really hope that my readers will enjoy The Sword and the Passion and feel transported to another time and place as I was when I wrote it.

Researching historical fiction is very satisfying, however the period known as the Dark Ages seems to be called such as very little is known about it. Contemporary accounts are few and far between about the time when the Romans had just left the British isles, taking their scribes with them and yet this book takes you back to this period of unrest and relative danger and sets a per-medieval story containing family drama, romance, kidnapping, murder, theft and battles in a believable setting with the smells, clothes, dialogue and setting of this time period without a dragon or zombie in sight, which is very refreshing for those that like believable stories not just fantasy. [by Sophie Sweatman]