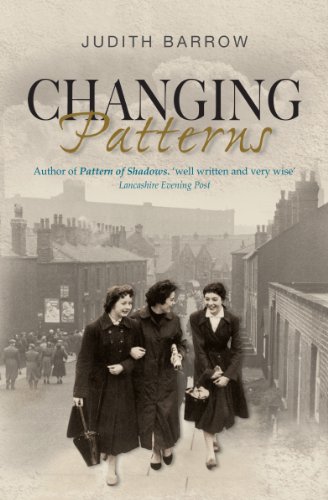 about this book: Changing Patterns is the sequel to Pattern of Shadows, the novel inspired by my research into a disused cotton mill, Glen Mill, in Oldham, Lancashire and its history of being the first German POW camp in the country.

In times of war the relationship between Mary Howarth and Peter Schormann was called fraternization. And fraternization was a dangerous and serious offence. After the war, it was looked on by many as equally unacceptable. Especially by Mary's family

Changing Patterns begins in May 1950 when Britain is struggling with the hardships of rationing and the aftermath of the Second World War.

In Ashford the Howarths are still a troubled family: Patrick, Mary's volatile younger brother, who is married to her best friend, Jean, treads a fine line between his legitimate market business and the Black market. Their marriage is equally unstable.

Ellen, her sister, is married to Ted, a kind gentle man, but who still bears the scars of a brutal POW regime in one of the camps in Germany. Ellen is also coping with Ted's mother, Hannah Booth, a possessive and jealous woman.

Patrick and Jean have one child, Jacqueline. Ellen and Ted, two; Linda, now six and the result of a one night stand, and William, still a toddler. The two girls are very close. But their world will depend on the adults in their lives.

Having moved from Ashford, a town in the North of England, Mary, and her older brother, Tom, have, at last, settled down to a quiet and peaceful life in Llamroth, a village in Wales. Mary is now Matron at a hospital in nearby Pont y Haven. Tom has a small thriving business gardening for other people.

And, after long and lonely separation, Mary and Peter are finally together.

But, however determined they are to stay together, there will always be something to rock their world.

Mary's life is difficult: will she and Peter be accepted into the village, will their relationship affect her position as Matron in the hospital? Will she ever get over the memories of Ashford that now give her nightmares? Will her family stop their demands on her and let her get on with her own life?