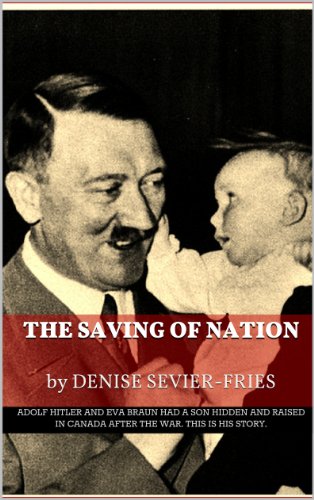 Book: The Saving of NATION by Denise Sevier-Fries

about this book: Writers find inspiration for their books in many places. I found mine while wearing an old striped bathrobe that belonged to a man whom I had never met: my father-in-law.

The thought that I, a small-town girl from the prairies in Canada was somehow wrapped up in the terry cloth coat of a man who once served in Hitler's army, struck me as highly unlikely. What kind of man was he? Did he ever sit down for a morning coffee in this housecoat and think back on the brutal days of World War 2 and try to forget, once again, all the horrors he witnessed?

All I know of my husband's father is that he was drafted into the war a sweet young man who only wanted to continue being a carpenter who was going to propose to his sweetheart, and returned from the war with one eye and a piece of his soul missing. He was hardened and bitter, but this did not rub off on his son, who is soft spoken, kind and loving. He says he never really knew his father.

Having a son of a German soldier as a husband made wonder how a son of Adolf Hitler would have handled the news of his parentage had he been raised in secret somewhere safe after the war…and was then informed on his 18th birthday because the Neo Nazi faction back in Germany was still wealthy and thriving underground on war riches, and were waiting for him to return and take over where his father had left off.

And had this son been raised Canadian…how would that alter whatever plans Hitler had for him? How was he raised and how did his experiences growing up German/Canadian shape him?

This was the basis of my story, and after researching facts for the historical fiction it would become, I discovered a 376 word message in the depths of Hitler's Last Will and Testament that shook me to my core. It is a real message and it made my story come to life.

Anton Alois Hitler I, code name NATION, is a fictional character, the son of Adolf Hitler and Eva Braun, in my book The Saving of NATION. Or is he?

• "I found this to be an interesting historical fiction novel. The concept was fresh, well researched and definitely believable which, to my way of thinking, is what historical fiction is all about!" — Misatosmom on Amazon, May 11 2013

Video: 'The Saving of NATION' - The story of Hitler's Son