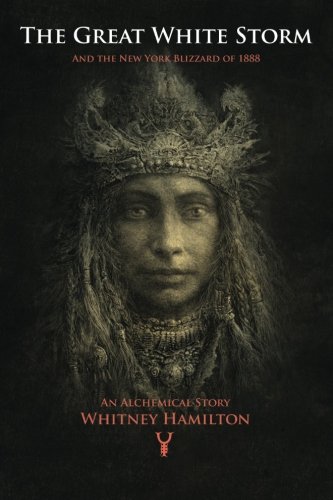 Book: The Great White Storm - And the New York Blizzard of 1888, an Alchemical Story by Whitney Hamilton

about this book: The Great Blizzard of 1888 crippled New York City as well as most of the Midwest and East Coast. It prompted the building of the New York City Subway system and is the reason that all power grids in Manhattan and Brooklyn are underground. Richard Rhys is married to the one of the richest society women in both England and the US. Pregnant with their first child Victoria finds the warm March day a good reason to venture to their manor house in the flatlands of Brooklyn. Closed up for the winter she takes a ride with the coachman over the newly built Brooklyn Bridge. By mid-day the weather has declined exponentially and Richard hustles home to their townhouse in Manhattan to be with his pregnant wife as the storm brews. To his horror and surprise he finds his wife is stranded in Brooklyn and is compelled to battle the gale force winds on foot to make his way to Brooklyn. While on this quest Richard meets with his former life as a medicine woman of the Lenni Lenape tribe. These are the original inhabitants of Manhattan. He also comes face to face with his future life, Ashley Coleman, a woman painter of abstract seascapes living in Brooklyn in 2011. After sending the coachman into downtown Brooklyn, Victoria finds herself trapped inside the manor house with no food, little heat and no way to reach the outside world. She is also met with her past incarnation as Tammanend, Chief of the Lenni Lenape and her future self, Chelsea Barrett, a writer for an arts magazine living in Manhattan in 2011.

Learning the art of Alchemy and spiritual enlightenment, Richard is able to transverse time and space informing both Ashley and Chelsea and affecting their future. As Ashley and Chelsea fall for each other Richard is reunited with Victoria in the manor house. Survival is key. Through Ashley's paintings, Chelsea discovers that Richard was a prominent painter and peer of John Singer Sargent. She stumbles upon a private collection held by the Tate museum. 13 large abstract sea paintings by Richard Rhys are only on view by appointment and special permission. The estate of his grand-daughter, an English philanthropist, has specified that only certain people may see the paintings. If viewed and studied in a certain order these paintings reveal the Philosopher's Stone and the path to enlightenment. As Chelsea and Ashley study the works in England Richard is able to evolve and raise his own vibration into the state of an angelic being. He is instrumental in bringing about conception to a same-sex couple.