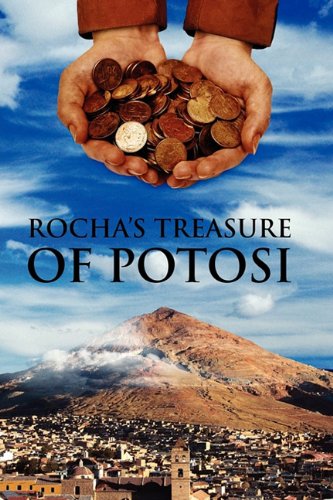 about this book: This historical novel has been called by reviewers an sweeping epic. It was a best seller in Bolivia, which is unbelievable because few here read or speak English. I fired the first publisher and they removed over 40 reviews on Amazon. I urge anyone who would like to learn about the most important city in the western hemisphere during the 1500's to read and enjoy this great adventure. Potpsi was the most industrialized city in the world at that time and was as large as Paris, yet few people have ever heard of it.

Ceria Rico, rich mountain, was the basis for much of the wealth of Spain and the mistreatment of the Natives drove Francisco Rocha to wage a war against the Catholic Church and the Spanish government. His activity nearly caused Spain to have a financial crisis and at the same time Europe suffered, because of Spains supper economic position.

THE AMERICAN TREASURE HUNTERS STILL ESTIMATE THAT THE UNFOUND ROACHA'S TREASURE IS WORTH OVER 200 MILLION DOLLARS ON TODAY'S MARKET. HAVE FUN, GET EXCITED, LEARN HISTORY, AND DREAM OF THE RICHES!!