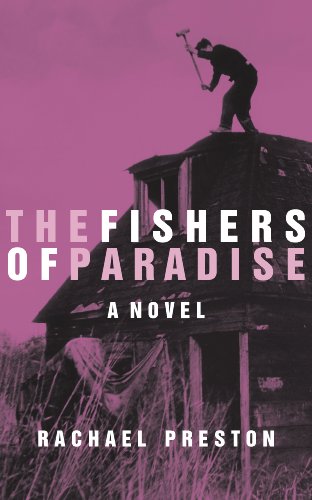 Book: The Fishers of Paradise by Rachael Preston

about this book: The Fishers of Paradise opens in November 1930, with the boathouse community, a colony of shacks that lines the shores of Dundas Marsh, gathered to witness a home being towed across Hamilton Bay, a move that foreshadows changes to come. Reform-minded capitalists, who see the rustic dwellings as a breeding ground for the seamier elements of working-class culture, want the place razed.

Egypt Fisher, just turning seventeen, is enrolled in Normal School and dreaming of a future far away from trapping rabbits and hauling water when drifter Matt Oakes, running from his own painful past, turns her head. Barely has she grown accustomed to these new feelings when her father, Ray, con artist and gambler, turns up after an unexplained six-year absence.

Ray, whose temper soon lands him in serious trouble with the Hamilton mob, sees at once what Egypt can't, or won't: the growing mutual attraction between Oakes and Laura, Egypt's mother. Ray exacts revenge by revealing Laura's secret; that her maternal grandparents, who Egypt believed were dead, live nearby. Reeling from this two-fold betrayal by her mother, Egypt sets out to seduce Matt Oakes and find her grandparents. But Oakes is difficult to reach, and before Egypt can take the first step to building a relationship with her grandparents, she discovers they are in collusion with Thomas McQuesten, the local politician who first championed Hamilton's City Beautiful cause, and who most wants to wipe the boathouse community off the map.