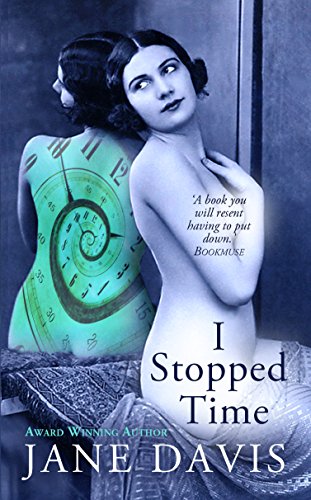 about this book: I drew inspiration for I Stopped time reading a biography of Lee Miller, one of my heroines. I knew her photography but, as it turned out, very little of her life. She was an extraordinary, extraordinary person. One of the most sought-after fashion models of her day, who became a muse to surrealist photographers and artists such as Man Ray and Picasso. But she had always yearned to be on the other side of the lens and, in time, she became highly respected for her own work. At the outbreak of World War II she became dissatisfied with her fashion work and documented the Blitz for Vogue, then underwent yet another transformation to become the only woman in combat photo journalism in Europe, taking incredible personal risks. Lee also recorded the first use of napalm at the battle of St. Malo, the liberation of Paris, and she was there when the victims of Nazi concentration camps were liberated. Her personal relationships were never straightforward, but it a huge testament to the strength of her personality that all of her ex-lovers became friends. She eventually settled down in Sussex with the artist and curator, Roland Penrose, with whom she had a son, Anthony. He knew Lee as an embarrassing mother and had no idea of her history until, after she died, he discovered her collection of work. I found his comment that he was cheated out of knowing someone really very extraordinary extremely poignant, and it set me on the road to discovering one of my main characters, Sir James Hastings.

Other things, I stumbled upon along the way. One of the things that happened while I was writing a book that spans the period of the First World War was the death of Harry Patch. I had been deeply moved watching and reading about the histories of the last of the Veterans, and admired him greatly for his decision to speak out after so many years' silence. After all that time had passed, you could still see how raw his emotions were.

The fact that photography is a passion of mine made I Stopped Time a joy to write. Jacques Henri Lartique, a self-taught photographer whose collection spans over seven decades, kept intricate notes of his experimentation with what was still a new medium when he was given his first camera as a boy. They became my sourcebook. In fact, I was able to pull several of my passions together: photography, a relatively new-found interest in history. The book is dotted with some of the incredible people I found along the way, whose paths would have crossed with my main character's. I've already mentioned Harry Patch. There's also Florence Mills, the first black female international superstar, and Edith Hawkes who became better known as Sylvia Ashley, a real rags to riches story.

Graveyards also feature. I am a huge fan of Victorian Cemeteries. Far from being morbid, I find them very peaceful places. I love the fact that you can find a person's life history right there in front of you. Someone I discovered from her gravestone was Phoebe Hessel who became famous for disguising herself as a man because she could not bear to be separated from her lover when he joined the army. She outlived both him when she married and her second husband, living until the age of 108.

Writing about a photographer, I saw various parallels with authors. In particular, when I was writing about the distance that Lottie feels from her work, when she says it's hard to take any credit for it because it has an energy of its own. Lottie is also reluctant to talk about her photography, comparing it to a magician being asked to explain how he has performed a trick. I feel those things, as I imagine many authors do. And yet there's an increasing expectation that authors, who are often quite reclusive, will make excellent public speakers.

I am aware that, as a recipient of the Daily Mail First Novel Award, the choice to write about the Daily Mail in what some people may not consider to be a particularly flattering light may seem contorversial. My main concern was to be historically accurate. You can't ignore the fact that the Daily Mail has a long record of sponsoring the arts, sciences and emerging technologies. There's no doubt that Lord Northcliffe was a marketing genius, but it's also true to say that without his indirect funding, some achievements either might not have happened, or would have happened far more slowly. Taking early aviation as an example, in 1906 he put up £10,000 for the first flight across the Channel and £10,000 for the first flight from London to Manchester. These ideas seemed so far-fetched that Punch said they would offer £10,000 for the first man who flew to the moon, but within four years both prizes had been won. The fact that my journalists were perhaps not the nicest people you might chose to meet was incidental. Without giving too much of the plot away, there wouldn't have been much of a story if Lottie had simply entered a photography competition and won.

The competition win influenced my writing in other ways. You might think that your reaction to winning a prize would be one of pure joy, but I found it was far more complex than that. Because I had very little publicity, I was able to deal with my emotions very privately, but I've become an addict to shows like the X Factor. You can see how winning a stage of the competition, when you have had a history of knockback after knockback from people who have told you that you're not good enough, or that you shouldn't set yourself up for disappointment by trying, can cause a physical collapse. I don't think Rylan and Christopher were acting. Winning can also be hugely humbling, and I hope that comes across in the story line.

The story is about a reclusive man in the autumn of his life who finds a way to forgive the mother who remained an absent figure for his entire life. He can't do that on his own, because, in order to explain her absence in a time when nobody explained anything to children, he had set her up as the villain of his childhood. In comes a young student, Jenny Jones, who, let's face it, is an unlikely friend, but, while he is trying to put up barriers, she recognizes what they have in common and tears them down.