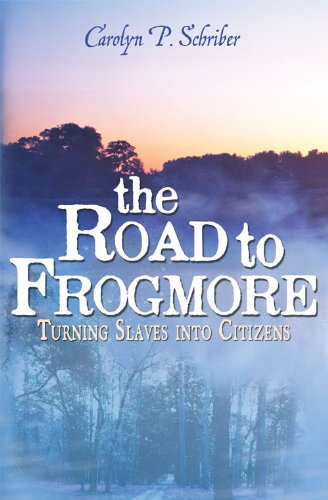 Book: The Road to Frogmore - Turning Slaves into Citizens by Carolyn P. Schriber

about this book: Laura M. Towne was a misfit in Philadelphia in 1860, but in 1862, in St. Helena, South Carolina, she was a woman in exactly the right place at exactly the right time. People had told her she was too homely to marry, too weak and feminine to become a doctor, too fixated on logic to be considered a Christian, and too outspoken to participate within normal male-dominated political situations. She defied all those stereotypes, and she changed the world. How she did so is the story of "The Road to Frogmore.'

Laura had never found the life of a wife and a mother an appealing one. She wasn't willing to be submissive and soft-spoken. She couldn't flirt. She desired a relationship between equals, a partnership with someone who shared her beliefs and goals. She found that relationship with her life-long friend and partner, Ellen Murray. Together the two women moved to South Carolina in the middle of the Civil War to bring education and medical care to newly freed slaves. The household they established lasted for forty years. They adopted several black children, cared for an entire community, and founded a school whose lessons and legacy still echo in its successor, the Penn Center.

Laura sought a medical education in a time when women were considered too delicate to view a man's body. After belong allowed to take classes but denied any clinical experience, she turned to homeopathic medicine, where she learned practical lessons about the value of cleanliness and fresh air. She also came to believe that no medicine available at the time was more effective than the simple expedient of holding a hand, soothing a symptom, or comforting a fear. The newly-freed slaves she treated commented that they felt better when she walked into a room.

Her Unitarian faith made her the enemy of several missionaries who came to South Carolina determined to convert the slaves to their own particularly narrow view of religion. She campaigned against those who tried to label African rituals as "savage and pagan." She helped oust a preacher who wanted to close communion to all those slaves who had not been baptized in his own church. Most important, she helped the former slaves find a common core of spiritual practices that could unite Christianity and their own African religions.

And always, she was an outspoken advocate of abolition. She spoke up against anyone, whether government official or military officer, or carpetbagger, who wanted to challenge the rights of former slaves to own property, attend school, and have a voice in their own government.

Laura's path was not an easy one. She faced life-threatening dangers from storms, malarial swamps, smallpox epidemics, and warfare sometimes being waged in her own back yard. She dealt with superstitious legends of night hags who sucked breath out of sleeping people, graybeard ghosts who lived in local trees, and other uneasy spirits that rolled down the roads at night in balls of fire. Her enemies stole her possessions, pushed her out of her house, closed her school, and accused her of killing her patients.

Could she survive all those threats? Could she rise above the animosity to bring love to those who needed it? Could she take thousands of slaves and turn them into productive citizens? She was willing to devote her life to trying.

Video: The Road to Frogmore - Turning Slaves into Citizens by Carolyn P. Schriber