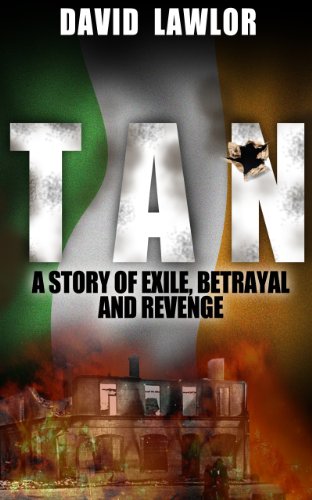 Book Review: Tan - A Story of Exile, Betrayal and Revenge by David Lawlor

about this book: The book is set in 1920, during the Irish War of Independence. It tells the tale of Liam Mannion, a young man wrongly accused of rape, who must flee his homeland. He enlists in the British Army and fights in France, enduring the horrors of trench warfare. After the war he works in a cotton mill in Manchester but soon finds himself destitute and starving. He is rescued from his predicament by an old Army comrade who convinces Liam to rejoin the military as part of a fledgling force going to Ireland - the Black and Tans.

While Liam has been away his childhood friends have joined the republican cause and are engaged in fighting the Crowns forces. Liam finds himself on a collision with his family and old pals as he wrestles with being loyal to his friends and to the Tans, who are quickly developing a reputation for brutality. He also comes face to face with the man who spread lies about him all those years before.

The story set in Balbriggan, Ireland, and revolves around actual events. For the most part, I stuck to those events quite closely and then added some twists of my own along the way.

It's a fast-paced read, so if you like action and excitement from the comfort of your armchair then I suggest you give it a try.
• "If you like historical fiction I truly recommend this book, but I warn you, you'll find it very hard to put down. Reading 'Tan' has left me with a thirst for more by this author." — Sonya, A Lover of Books

TAN is a gripping novel that begins before World War I and continues into the Irish War of Independence. Framed for a crime he didn't commit, Liam is exiled to England and endures five years of trench warfare in France before making his way back to his homeland as a member of the infamous Black and Tan forces, a group that served as a brutal strong arm force for the English crown. Stationed in his hometown of Balbriggan, Liam is forced to confront his own divided loyalties, as well as those of his own family, and face the brute who framed him.

Lawlor is a fantastic storyteller. He created characters I cared about, crafting even minor players in ways that made them memorable and real. I was pleased to find that the women in the story were written with substance and compassion. Lawlor builds the action in scene after scene in a way that makes the book hard to put down. Fortunately the frequent battle scenes that create an abundance of tension and anxiety are balanced with moments of humor.

The author's sympathies are clearly with the Irish, but the story fairly points out that both sides in a war are capable of brutality, both sides have legitimate points of view. Because Liam's own brother sides with the British, readers face the complicated reality of families torn apart by war. No one gets off easily in this one.

Many characters speak in Irish vernacular, which took me a while to settle into, but which ensured I was immersed in Ireland. The dialect didn't get in the way of enjoying the story, since it could all be understood in context.

TAN made me want to know more about the Irish War of Independence. Lawlor has me eager to read his next book.