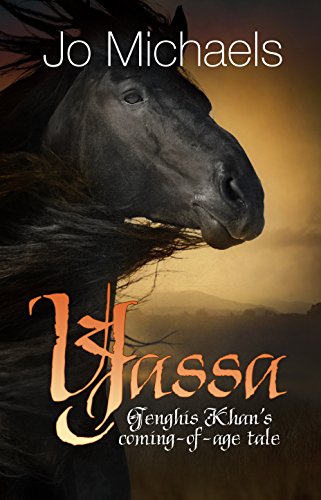 about this book: Yassa is Genghis Khan's coming-of-age tale. I was inspired to write it while doing a research project on the Khan for a World History class and running across truth that was more difficult to believe than some fiction. When I read about Genghis, his wife, Borte, and the fallout with his best friend, Jamuka, I thought there had to be more to their story. So I wrote it. It took me nine months from first word to published state and the book went through no less than ten rounds of edits. I scrapped the Prologue four times.

Women from age sixteen to age seventy, and men from age thirteen to age eighty, have enjoyed Yassa. It's because there's a wonderful love story that doesn't get too sappy, lots of action, and a hard look into the mind of one of the greatest warriors that ever lived. I called it Yassa because of the law Genghis wrote by the same name. Law and following it play a huge part in building the story. I chose the cover because it is soft and pretty, like Borte.

I threw my heart and soul into this book. Many hours of research, fact checking, and a strict timeline were used to create what may be the most engaging book about the man that's ever been written. A lot of what a reader gets is fact. Very little fiction is woven into the happenings. My imagination kicked in when the characters interacted with one another.

Look at it this way: If you hate History, you'll love learning about Genghis Khan via Yassa. You'll have all the facts and a little fiction to keep it interesting.

Other books by Jo Michaels (more)