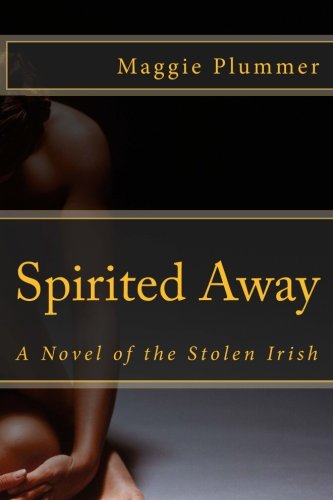 Book: Spirited Away - A Novel of the Stolen Irish by Maggie Plummer

about this book: It's May 1653. When fourteen-year-old Freddy O'Brennan trusts the wrong stranger on an empty beach in western Ireland, she inadvertently places herself in the crosshairs of Cromwell's notorious Reign of Terror.

Freddy awakens in the cramped hold of a slave ship bound for Barbados. Ripped from her loved ones, she endures a gruesome voyage and a vile auction. Freddy, sold to the highest bidder, alone, and far from her beloved homeland, faces the brutal realities of life as a female Irish slave on a seventeenth century Barbados sugar plantation. Amidst the island's treacherous beauty, she must find a way to bear her cruel, drunken Master using her as a breeding slave and kitchen drudge.

Heartsick with yearning for her family and the farm life she knew, Freddy reaches deep inside herself for the strength she needs to protect her young spirit from being broken. As she struggles to survive rape, degradation, beatings, and the harrowing spectacle of her Irish countrymen being flogged and starved to death, the high-spirited Freddy risks severe punishment by sneaking food and medicine to the suffering field slaves. Eventually she braves more serious threats for the sake of loyal friendship and love.

SPIRITED AWAY – A NOVEL OF THE STOLEN IRISH is a 60,000-word historical novel that paints an intimate, compelling portrait of 1650s Irish slavery in the Caribbean.

This historical novel is a glimpse into the all-but-forgotten Irish slave trade in the 1650s. The book's young main character, Frederica ("Freddy") O'Brennan, is "spirited away" from her family, herded onto a slave ship that takes her far across the wide sea to Barbados, and sold to an English sugar plantation owner as both a working and breeding slave. The book portrays the greed and cruelty of this slave trade, but at the same time follows Freddy as she makes powerful, deeply felt connections to other slaves of different nationalities on the plantation. Along the way, the reader experiences the beauty of the Caribbean, the squalor and torment of Irish slavery, and the resilience of the human spirit in the face of atrocity. The novel is based on thoroughly researched historical events. However, the history is artfully woven into an engaging tapestry of a narrative that overflows with strong, original characters.

Four years ago, I began writing this novel when I stumbled upon information about what happened to the Irish during the 1650s, at the hands of Oliver Cromwell. As a proud Irish-American, I am amazed that I had never heard of Irish slavery before. I am eager to help bring this story into the light. I believe that we must learn from even the most painful parts of history. This particular history will increase the world's understanding of Irish culture and nationalism.

I have dedicated the novel to those who are fighting modern-day human trafficking, which is all too prevalent around the world.

Of the novel, one reviewer says: "...beautifully written, lyrical, and haunting."

Publishers Weekly says: "In this highly researched novel, Freddy O'Brennan is living a modest and happy life in 1653 Ireland until English soldiers force her father to fight for the Crown in Spain. Freddy is a survivor, quick to adapt to dire situations, which makes her an easy hero to root for. Freddy's on point characterization is the saving grace of the opening, as the conflict arrives on the second page before there is time to establish a connection between reader and story. By May of 1653, Freddy thinks she is safe, until English soldiers kidnap and sell her into slavery. Freddy's ordeal interweaves with that of African slaves, and in an honest portrayal, she must battle her own prejudices against her fellow slaves… Short chapters full of hope and Freddy's fierce spirit will keep readers turning the pages."

5 stars! Author Milana Marsenich says: "Her characters depict the timeless strains of the best and the worst of humanity through the ages, juxtaposing courageous love with cruel brutality."

Video: Spirited Away - A Novel of the Stolen Irish by Maggie Plummer