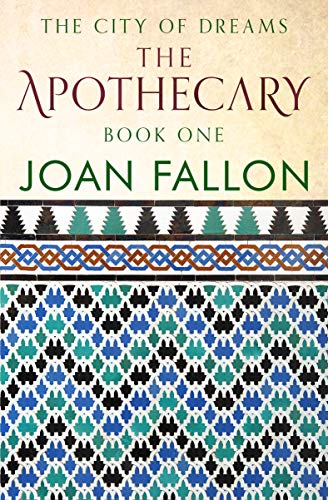 Book: The Apothecary (City of Dreams Book 1) by Joan Fallon

about this book: In the first novel in a new historical series set in Moorish Spain, Joan Fallon sets the action in the busy medieval port of Málaga. Following on from the successful al-Andalus series, we meet up again with the younger members of the family who had escaped from the besieged city of Córdoba.

Makoud, now a middle-aged apothecary, has come to Málaga with his family to work. Shortly after they arrive they hear of the sudden death of the caliph Yahya I and rumours that he was poisoned. Makoud is worried that the poison used by the assassins was bought from his shop. His son, Umar, now a soldier in the caliph's army, decides to investigate but he underestimates the power of the people behind the assassination, and instead he finds himself accused of murder and locked in the dungeons. His father, family and friends pool all their resources to try to help him but the closer they get to the truth, the greater the danger they are in.

Video: The Apothecary - The city of dreams trilogy (book 1)