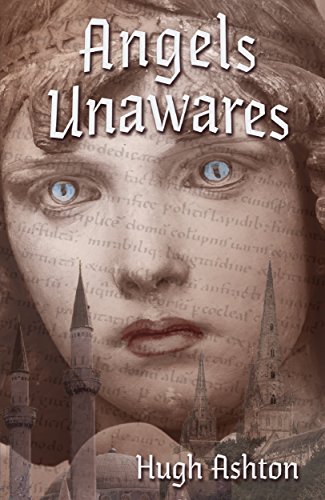 about this book: Angels Unawares was a story which grew out of a single scene - an old man sitting outside waiting for something to happen. He doesn't know what it is that is going to happen, and he is living in an unfamiliar part of the world.

And then I added a flashback scene - the old man was an Italian Renaissance bishop, and he is arrested and thrown into prison by his oldest friend, who now rules the city where Gerardo (by now he had a name) was bishop.

It took some time to describe the places and the locations of the action, and to add the little details, but when I had finished, I felt that I had captured much of the mood and feeling of the times. And the plot took me by surprise - it wasn't quite what I had expected it to be when I started, but I was pleased with the way it worked out.

The cover incorporates a Renaissance manuscript, a stone angel, a mosque, and my photo of Lichfield Cathedral, which I can see from my desk as I type this.

"…a story that seemed primed to be about religion and gave it a science fiction twist, somehow without allowing the latter to cheapen or override the former. It could have easily seemed incredible (in the bad sense), but rather felt rewarding."

"…Hugh Ashton has to be one of the most versatile writers out there …
The novella "Angels Unawares" represents yet another departure into a genre that might be called historical fantasy."

"Kudos to Mr. Ashton for stepping out of the world of Sherlockian London into 15th Century Italy to bring us a tale of wonder."