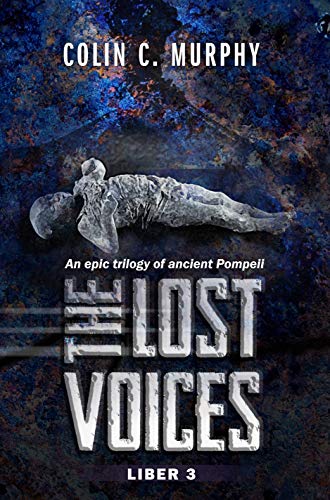 about this book: The third and final part of the epic trilogy, The Lost Voices - Liber 3 reaches a thrilling and emotional climax. The eruption of Vesuvius that will destroy the town is yet months away, but the first signs that the Gods are stirring have already begun to manifest themselves. Yet life goes on for ordinary people. Publius succeeds in having his satire on Epidius performed in the theatre, but amid the howls of laughter a smaller, more tragic scene is played out, putting all of Publius's ambitions in perspective. Gnaeus continues his relentless scheming and is not above putting his own family's lives at risk to defeat Epidius, his greatest rival. But ridiculed by Publius's play, Epidius is desperate for revenge and finds the means to it when he uncovers Cominia's secret past. And Publius must then face the greatest drama of his life as he tries to save his true love's life, just as Vulcan unleashes his fury upon the doomed town...

I was inspired to write this book when I encountered the many graffiti scratched into the walls of Pompeii. The more I researched the subject the more the people who wrote those words so long ago began to come to life. Moving, romantic, humorous, vengeful, crude and philosophical, those countless graffiti gave me unique insights into the lives of ordinary Pompeians and inspired me to hear again those voices that had long been lost.

A labour of love, from conception to completion, the three Lost Voices books took almost four years to complete, but I enjoyed every moment of it, as I hope you will enjoy every moment of reading not my story, but the stories of those many real-life Pompeians between its pages.