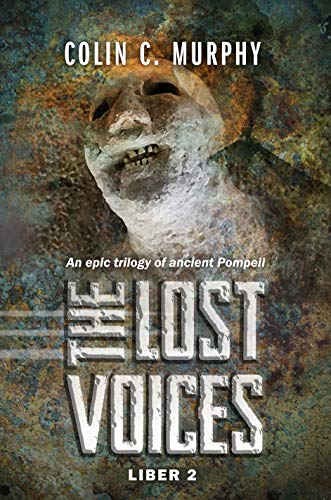 about this book: The Lost Voices is an epic trilogy of novels set during the two decades preceding the destruction of ancient Pompeii by the eruption of Vesuvius. Uniquely, it is based on the countless fascinating graffiti that the inhabitants left behind, which gave us compelling insights into the lives of the ordinary Pompeians. Touching, funny, lewd, romantic - the graffiti reveal the humanity of the ancients in ways that normal sources such as historical texts simply cannot.

Here are a few brief examples:

Here slept Vibius Restitutus all by himself his heart filled with longings for his Urbana.

If anyone does not believe in Venus, they should gaze at my girlfriend!

I wrote The Lost Voices because I have always been drawn to the forgotten ordinary people of history, the ones who don't feature in our history books or have statues erected in their honour, but were no less real or valued as people as you or I, and I wanted to make their voices - which have been lost for so long - heard one more time.

The book was a labour of love that took several years to research and write and included several visits to Pompeii and Herculaneum, not to mention multiple other ancient Roman sites.

The Lost Voices - Liber 2 is the second part of the engrossing epic.
It is now 79AD. Seven years have passed and Publius the baker and Cominia are married with children. Cominia has never revealed her hidden past to her husband - that she is actually a slave. Publius's stepfather, Gnaeus, meanwhile plots to destroy his hated political rival, Epidius, and he is not above using his own family as pawns to achieve his aims, putting them in terrible peril. And as a consequence passions are inflamed and a terrible secret is revealed that threatens to destroy their entire family.

But while men plan, the gods laugh. For the fate of all of those in Pompeii hangs by a thread. And the first rumblings of something momentous approaching are beginning to be felt…

Compelling and unputdownable, don't miss the compelling second instalment in Lost Voices trilogy. It is storytelling at its finest.