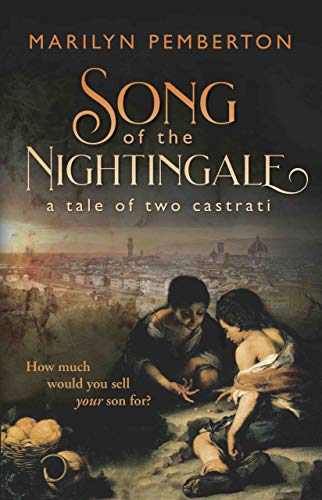 Book: Song of the Nightingale - a tale of two castrati by Marilyn Pemberton

about this book: The seed for what became my second historical novel, Song of the Nightingale, came about four years ago, when I listened to a discussion on Radio 3 about Alessandro Moreschi, the only castrato ever to have been recorded. It was mentioned, almost in passing, that young boys in 17th and 18th-century Italy were often handed over to conservatoires by their poverty stricken parents, where they would be castrated and taught to sing, so that their sublime voices could praise God. At the same time they would be earning money for themselves and their families. As soon as I heard this I thought, "What a great story this will make. I wonder what it was like for the boys and those around them?"

After some initial research it was clear that any novels on the castrato mainly focussed on him as an operatic celebrity, who indulged in court intrigues and dubious pleasures. My interest, however, lay more in the emotional, spiritual and psychological impact on the young boys themselves and those involved in the practice. It was not so much the end result, as the journey that I wanted to explore. I decided to tell the story from the point of view of Philippe, secretary to a count who waned to gain social respect and possibly even to be honoured by the Pope, by sponsoring one or more castrati. Having Philippe as the narrator, rather than the boys, allowed me to tell more about Italian life outside of the conservatoire and to have a story that includes passion, guilt, retribution, love and redemption.

I didn't want to write a history book but I did want my descriptions to be realistic. I bought five or so books about life in Italy during the 17th and 18th centuries and "The World of the Castrati: The History of an Extraordinary Operatic Phenomenon" by Patrick Barbier (Souvenir Press, 1996). In the initial chapters Barbier explains that very little is known about the life of the castrati, as there are very few written records. This was a godsend to me because although I wanted the book to be as realistic as possible, if the reality is not known then I could use my imagination to its full extent.