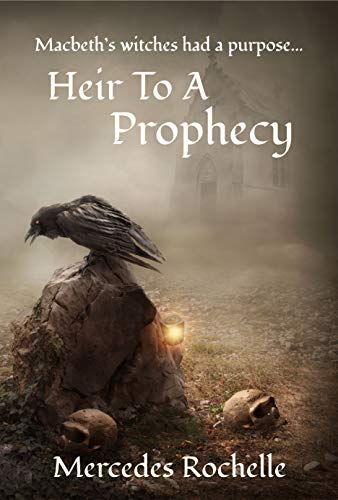 Book: Heir to a Prophecy by Mercedes Rochelle

about this book: All the way back in my college days I was fascinated with Shakespeare's Macbeth and the witches' prophecy. What kings were they talking about? At the time, I assumed they meant someone imminent, but little did I realize they were talking over 500 years into the future! I was surprised to discover that Banquo was thought to be the ancestor of the Stewarts, and James I had only mounted the throne of England a couple of years before this play was written. Shakespeare was giving a nod to James I's ancestry—and his work on demonology—while showing his audience that killing the king was a really bad idea. My protagonist Walter was destined to be the first Steward of Scotland and ancestor to the royal Stewarts. But his was not an easy path and this book takes him through many of the major events in eleventh-century Britain before he found his future in Malcolm III's court. In fact, Walter's accidental relationship with major historical figures places him right in the middle of the action. Shakespeare's play is just a starting point; the novel quickly brings us into Anglo-Saxon and Scottish society: "If you enjoy well-written historical fiction grounded in fact, and if you ever wondered what happened to Fleance after Banquo was murdered, you may well enjoy this novel." (Amazon review)

Video: Book Trailer: HEIR TO A PROPHECY by Mercedes Rochelle