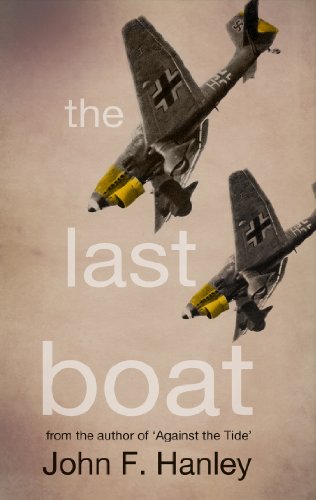 about this book: The greatest disaster in British maritime history occurred on Monday 17th June 1940. More perished in twenty minutes than the total losses sustained during the sinking of the Titanic, Lusitania, HMS Hood, and the Battle of Trafalgar. Yet most people are unaware of this shocking event especially as an embargo was placed on the British press at the time and the files have been sealed until 2040!

I discovered this when researching the second novel in the Jack Renouf series and decided to rename it THE LAST BOAT in honour of the bravery of the over 6,000 British servicemen and women who lost their lives when the Luftwaffe bombed HMT Lancastria then callously strafed the survivors and tried to set them on fire by dropping incendiary bombs into the lake of oil spreading from the broken ship's bunkers.

Jack, Miko, Lt Commander Brewster, and Saul, who has navigated his father's cruiser from Jersey down to St Nazaire to assist with the last stages of the evacuation of the British Expeditionary Force (BEF), all appeared in the first novel, AGAINST THE TIDE, and at 4 pm that tragic day have just ferried the last group of evacuees from the Old Mole and are alongside the converted liner trying to persuade its captain to take them aboard when three Ju 88 bombers appear.

I found it very difficult to write the ensuing scenes as I drew on eyewitness accounts which were exceptionally harrowing but I wanted to expose the ruthless and inhuman actions of those German airmen. This is a work of fiction but founded on the most unpleasant of facts which I was later commissioned to produce for the English Historical Fiction Author's site http://bit.ly/1TZ4kgu

But this is just the beginning of Jack's adventures during the Fall of France as he tries to escape and is drawn into one of the most important events in the early war when he and his friends assist the French Secret Service to extract the world's entire supply of D20 (Heavy Water) which has been smuggled out of Paris before the Germans arrive. This isn't an entirely fictional account but based on real events as these canisters of expensively produced deuterium oxide are essential to the moderating process involved in splitting the atom and cannot be allowed to fall into Nazi hands!

Although this is a standalone novel, I'd advise reading AGAINST THE TIDE first to become acquainted with the main characters and appreciate how, in those twenty minutes, all the innocence of teenage Jack Renouf is eviscerated and sets him on an implacable path of revenge.