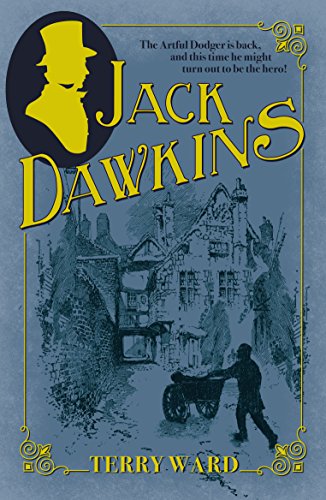 about this book: American author and book reviewer, Anthony Avina, wrote of my novel, 'Jack Dawkins-being the further adventures of the Artful Dodger' '-[this is] a breath-taking and beautiful story that readers need to have in their lives.' With the author's best interests at heart, the Artful Dodger wholeheartedly agrees with that statement, although, when he returned from 'mutton pie and porter' heaven, in order to lend me a hand [see the YouTube video 'The spirit of the Artful Dodger'] he also declares, with his tongue stuck firmly in his cheek, 'it's no skin off my nose if you don't buy a copy! .

Taking the advice of others, I tore this tale from the heart of a long lost epic of mine. I don't mind telling you that writing this new version has taken a year out of my life, but with a strong feeling that the Artful Dodger was looking approvingly over my shoulder throughout its creation, I have apparently done, 'an excellent job of bringing the Dickensian world to life through dialogue and description' [Broken Tepee, Montana] 'successfully capturing the language and syntax of the period.' [Alex Ulyett of Viking/Penguin Books]

We all know where Oliver Twist came from and how, thanks to some extraordinary coincidences, he ended up living in clover; but what about the Artful Dodger, Jack Dawkins? Charles Dickens deliberately made him a wicked counter-point to the saintly Oliver. Well, I reckon you'd be wicked too, if, from a very young age, you'd had to fight for survival in the noisome stews of Regency London. As Jack, himself, remarks, 'you ought to try it some time. It's an education!'

The Artful Dodger being a perennially popular character, I felt that it was high time the general public learnt the surprising truth about him. After Jack embarks on what proves to be a perilous quest to discover his roots, he is more than a little surprised by it, too.

As for the jacket cover; should I have shown Jack being captured by soldiers on a beach, as Lysette, the love of his life, is carried away by kidnappers? How about that romantic tryst he has with her in a shepherd's hut? Alternatively, I could have selected the scene where, with the help of Oliver Twist, Jack escapes from a small-town jail. Finally, talented designer, Charlotte Mouncey, of BookStyle, settled on recreating the moment where the ever resourceful Jack Dawkins has rescued Lysette from the hands of villainous Daniel Madeley. I could have used images of the pursuit on the road to Brussels, I suppose, or even depicted the siege of that Belgium farm building. Oh, give it a rest, Terry! People are saying they love the one you eventually decided upon.

Phew! Jack Dawkins is out there at last, and widely available; but without promotion and publicity, dear readers, a book that, according to reviewer, Vishnu Chevli of Gujarat, has 'everything a reader wants,' will languish and die; a sad fate, don't you think, for what WhisperinStories declares to be, 'a brilliantly and evocatively written story, and a worthy sequel to Oliver Twist.'

Retired army colonels, school teachers, librarians and fifteen years old schoolgirls have all written that they love JD. At the risk of over-egging the pudding, I draw your attention to the large number of great reviews this book has received on Amazon and various other sites on Google. Don't forget to watch that four-minute video on YouTube!

An avid reader and writer throughout my long life, I commend 'Jack Dawkins-being the further adventures of the Artful Dodger' to you-and you- and you; in fact, to all book lovers aged 14+, wherever they live and whatever their gender.

What do you look for in a book? Murderous villains? In JD, you've got 'em! Enjoy cynical, good humour, do you? Jack provides it in spades. Romance? Certainly. Jack learns what it's like to really love another human being; and in doing so, discovers his true self. Adventure? 'Jack Dawkins-being the further adventures of the Artful Dodger' is a non-stop roller-coaster ride of thrills, spills and escapades. Historical accuracy? Check it out.

A Glossary contains brief explanations of the meaning of some archaic words and expands on historical facts.

Video: The Spirit of The Artful Dodger, Jack Dawkins, returns to assist his ghost-writer