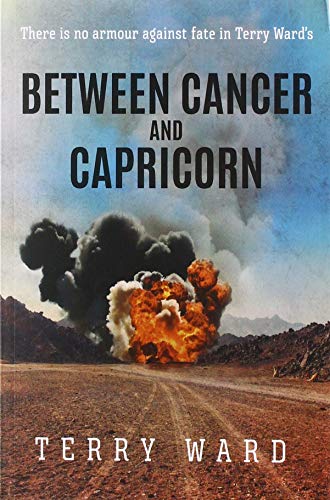 Book: Between Cancer and Capricorn by Terry Ward

about this book: Doffing my rather battered hat to LP Hartley, I can confirm that the past is indeed a different country and things are done differently there.

Delve into my post Second World War novel, 'Between Cancer and Capricorn' and you will discover just how different. For example, there is a remarkable absence of political correctness and 'ealth and safety. Sex is as popular as ever, but only acceptable on a 'normal' basis. Vestiges of the British Empire remain in place and beer is cheap! There are steam trains, too!

All of the above and much more besides are part of the fabric of the world in which Harry and Robert Bowen live. Just like the rest of humanity, they suffer from what poet, James Shirley, described as 'the levelling dust of fate.'

In their case, it ruthlessly tears them apart; traumatising Robert and causing guilt-ridden Harry to recklessly risk his life in the Korean War, and elsewhere. It's a curious thing, isn't it? A man who doesn't care if he lives or dies, just goes on living, despite throwing himself into harm's way at every opportunity.

Faint shadows of people who have drifted in and out of my life, flit through the pages of this book, as Robert falls in love with beautiful Barbara Meadows, and Harry is seduced in Hong Kong by treacherous Linda Yeung, before being coerced into becoming a member of a sinister branch of MI6.

Follow what happens to the estranged brothers until fate brings them together in a fight for survival. I mean, apart from having close encounters with virginal Barbara, the girl who fashion photographer, Jeep Allen, will make rich and famous, you will get to know exotic Linda, and that lusty, young nurse, Jane Hazell. there's Marjorie and a nice Somali girl in there, somewhere, as well, but I didn't catch the latter's name. Stop drooling like taxi driver, Ken Bateman, and enjoy the banter of a brigade of chefs at the Hamilton Hotel, then find out how Robert, with the help of two gay stewards, Hildy and Little Mo, gets the better of ship's bully, Geordie Brighouse. It's not exactly an R&R jaunt, but why not join Harry on a trip to the edge of the Empty Quarter in the Arabian Peninsula? Keep your heads down, though, the book's explosive jacket cover indicates part of what occurs in that desolate place. This, along with most of the other far-flung location visited, were my old stamping grounds.

You can probably tell by now that my recently published 'Between Cancer and Capricorn' is a novel for tolerant grown-ups who enjoy a good page-turner, have a sense of humour and at least some insight in to the human condition. Some reviews for it would be nice.

As for me; I keep the past handy,like a favourite book; re-reading a few pages every now and again to remind me of my own adventurous youth.