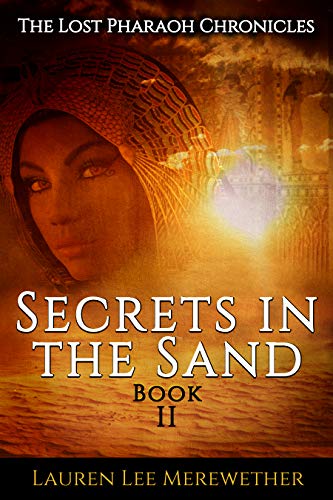 about this book: Secrets in the Sand is the second of four installments of my debut series, The Lost Pharaoh Chronicles. The series covers the Ancient Egyptian New Kingdom, specifically chronicling the reigns of Akhenaten, Smenkare, Neferneferuaten, Tutankhamun, and Ay, whom were all erased by Ay's successor, Horemheb. Hence, the series title, The Lost Pharaoh Chronicles. Secrets in the Sand covers Smenkare and Neferneferuaten and the title for this installment has multiple meanings, some of which are buried in the book, so I will let each reader uncover the meanings as they dive into the story.

I spent a lot of time researching this time period and crafting and outlining the remaining series before I actually starting writing Secrets in the Sand. I find the Amarna period fascinating and loved crafting this story that fit within the historical evidences that have survived to today. Secrets in the Sand covers the least known aspect of time and the one with the most theories of what actually might have happened, so I was able to take a bit more liberties in this story. I am a definitely a square or box person and the fact I could write outside the confines of a set historical facts (because there were slim to none in this instance) was the most frightening part of writing the book, but I also found it to be the most liberating.

I hope each reader finds meaning, enjoyment, thrills and tears in this book and looks forward to Book III and Book IV to experience a time erased.

• "Fans of political and bloodthirsty dramas like Game of Thrones are sure to dive right into the conspiracy and murder amongst the pages of Secrets in the Sand in just the same, compelling way...a page-turning frenzy...Secrets in the Sand is a superb continuation of a fantastic and immersive historical series."
- Readers' Favorite​ (K.C. Finn) Five Star Review

• "...a vivid portrayal of a society characterized by the quest for power..."
- Readers' Favorite (Christian Sia) Five Star Review

• "From high-level political intrigues to the tender blossoming of romance, Secrets in the Sand has it all...with characters that step off the page."
- Readers' Favorite (Caitlin Lyle Farley) Five Star Review

Other books by Lauren Lee Merewether