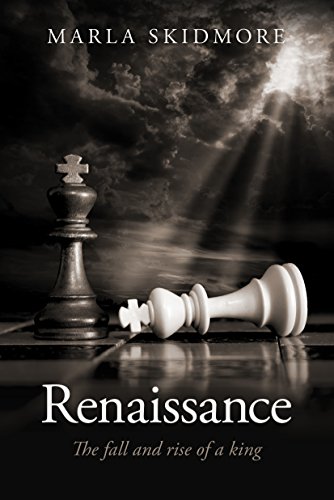 Book: Renaissance - The Fall and Rise of a King by Marla Skidmore

about this book: 'Renaissance - The Fall and Rise of a King' is inspired by the discovery of King Richard III's remains beneath a Leicester city car park; together with my own conviction that he was not the monstrous villain of the Tudor histories and Shakespeare's play. To allow the reader to be witness to the key events in Richard's life and to be able to give an insight into his relationship with those significant historical personalities that had an influence upon him,I have taken a new approach in the writing of my novel - set the story in the framework of his own recollections in the Afterlife. On regaining consciousness on Bosworth's bloody field, he is fearful and bewildered to find himself still alive. His gaze takes in the carnage surrounding him to see Henry Tudor standing triumphant over a mauled and battered corpse - which to his utter horror turns out to be his own. And so the reader is taken with Richard on a harrowing journey of atonement; accompanied by his celestial mentor Father Gilbert, a Franciscan monk. During this journey he tries to come to terms with the actions he took, their consequences and the legacy of the Tudor propaganda machine, which turned him into one of the worst villains in history.

I have tried show the reader the medieval mind - where Heaven, Hell, Purgatory and the Garden of Eden are all utterly real - given him/her a look into Richard's psyche - to see the king pared down to the tough uncompromising man behind the crown; and also to see the torment of a soul who believes that his honour and reputation have been eternally defiled and forever destroyed.

In this story I have also not been afraid to tackle History's biggest murder mystery. Whilst researching Richard's reign, I came across some little known detail - held in the archives of St George's Chapel, Windsor - which allows me to give, what I believe to be a very plausible answer to the question of 'who killed the princes in the Tower?'

In the writing of this novel I have attempted to raise a number of questions - about history - how we perceive it, how it is written and portrayed and there is also the question of an afterlife - if it exists - how does a soul deal with the bismirching of his/her reputation after death - in Richard's case - when there is no one left to defend it.