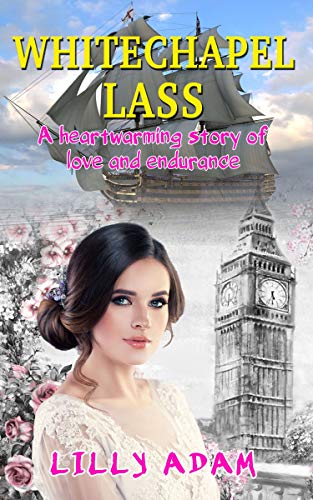 Book: Whitechapel Lass - A heartwarming story of love and endurance by Lilly Adam

about this book: Unable to face going through with the marriage to the wealthy George Stone, which had been completely orchestrated by her stepmother, Victoria Thornton decided that she would simply disappear. It was not the first time that her father, Robert Thornton had been faced with such a scenario; his beloved first wife, Ruby Skinner had taken the same path of action nineteen years earlier.

Ruby Skinner, who had been born into hardship and poverty was the only remaining sibling left to take care of her sick mother. The rundown, infested tenement buildings of Whitechapel were no place for an ailing mother to make a recovery and in a bid to move her mother out of London and into the countryside, Ruby embarked on a dangerous and foolhardy meeting with Donald McCoy, a notorious East End villain. It proved to be the beginning of a life plagued by one disaster after another, and when Clarissa Parker realised that Robert Thornton, the man she intended to marry, had eyes only for Ruby she set about planning her evil traps.

What had happened to Ruby, had she met with her fate? Would Robert Thornton ever find true happiness again, and what was the thoroughly spoilt Clarissa Parker capable of doing, to secure the man of her dreams?

Other books by Lilly Adam (more)