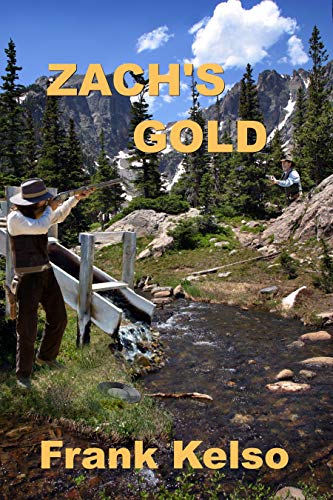 about this book: Gen Sherman's personal guard captured Jeb and Zach at Missionary Ridge in the Battle of Chattanooga. As prisoners, they ended up in Camp Douglas, a POW camp near Chicago. In the brutal winter of 1863-4, Zach became critically ill with dysentery. Jeb gathered illicit food to nurse Zach through.

In Zach's delirium, he spoke of going west to California to find gold like he once found in Georgia. At the war's end, Jeb and Zach traveled a circuitous route through Georgia to Texas to find lost or missing relatives.

The stop in Texas became a disaster when they found Jeb's family dead and his niece kidnapped by border bandits. After they recovered Jeb's niece, Zach decided to hunt for gold alone. An old El Paso newspaper said they found gold in South Park Colorado.

The first person Zach met in Colorado said, "Watch your back. There ain't no law in South Park."

When they found him, Zach made them wish they hadn't!

It's a turn-around for the taciturn and solitary Zach.

He understands he can't fight the large gang alone, but can he follow Jeb's example of convincing folks to follow him.

Can he convince the independent miners to join him fighting the claim-jumpers?

Can he stop the murder and loss of their claims?

In the midst of all this, can he find his own gold?