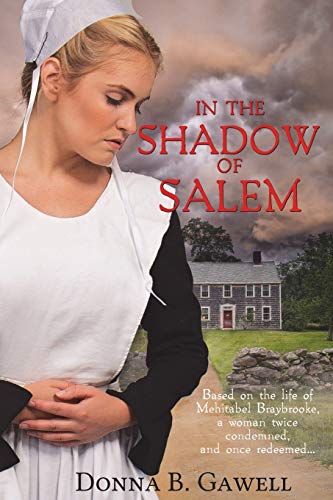 Book: In the Shadow of Salem by Donna Gawell

about this book: Writing as a Royal Edict

My soon to be released historical novel, "In the Shadow of Salem" constantly prompts me to ponder about my five-year career as an author. I thought about how this remarkable gift was dropped into my lap about six years ago. It was a blessing, a surprise, and something I thought I didn't have the background or skills to handle.

The gift of my ancestors' stories emerged when I first started in genealogy in 2012. I knew almost nothing of any relative before my grandparents and little beyond what I observed in their old age. I had no expectations of finding royalty or a direct line to presidents; I just wanted the facts.

My first exciting discovery was my 3rd great-grandfather, Charles Chapman, and his wife, Fanny. I uncovered the stories he told to his Medina Gazette reporter friends back in the late 1800s. He was their local drayman or delivery guy, and in 1882 walked into the newspaper office to tell them that "Fifty-two years today, I landed in Medina…" He went on to describe how the village looked back in its first years with cabins, taverns and the old courthouse, and the old town square where "wicked circuses and menageries pitched their tents."

I was consumed with Charlie, found his home built in 1820, and the owners gave me a tour. My article about Charley was published in the online newsletter of the Friends of the Old Town Cemetery. I joke that my professional writing career began in a cemetery.

But it was my 9th great-grandmother, Mehitabel Braybrooke, the main character of "In the Shadow of Salem" who captured my imagination. As I was delving further back into my family tree on Ancestry.com, I came across her name, and my first response was "Wow, that's an ugly name!" Then, the word "witch" emerged from her records and my hands began to tremble. Mehitabel had been written about in history books and the old town court records, but not in a good way. She was described as an arsonist, unchaste, an alcoholic, and a liar in addition to the accusation of witchcraft.

I pieced together her biography and would tell it to anyone who would listen. The more I repeated her life story, the more convinced I was that someone needed to write it down. Thus began my career as a novelist, and the result is my debut novel "In the Shadow of Salem."

It was apparent from the beginning I had been lavishly blessed with other fascinating ancestors who had untold stories. I now look at each new family history fact as a possible inspiration for my writing.

My current project has taken me back to my grandparents' village in Poland as I learn and research the experiences of my relatives whose story during WWII has never been told. Not only am I inspired, but those that remain in Poland are thrilled that after 75 years, their story will finally be revealed. I have a tribe of four priests and numerous historians in Poland who have joined my research army providing me details of the amazing WWII history from the little village of Niwiska.

How have other writers missed this little village hidden in the forest wilderness that the Nazis evacuated to set up the largest SS training camp outside of Germany and then the site of Hitler's top research V1 and V2 missile project? The answer is obvious: the story could only be a gift kept sealed until it was time. When an author receives such a wonderful blessing, the only response is to write a historical novel as a royal edict.