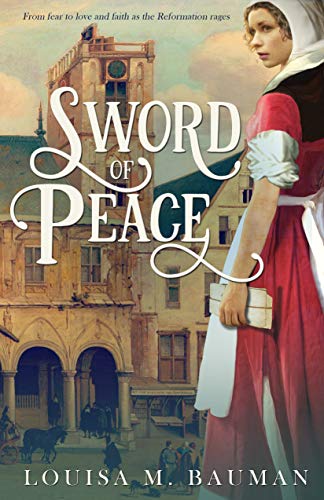 about this book: What if the government of your country hunted you, and planned to kill you because you refused to go to their church?

Before the Reformation in the sixteenth century, the powerful Catholic church ruled the Roman Empire, and no matter what your opinions really were, you hid them to save your life. Until things got so corrupt that people rebelled. This set off the Reformation, and the world would never be the same again.

I wrote this book because my ancestors were among those who rebelled. But not with swords and guns for weapons. Their only defence was their faith in God, and when they would not deviate from a single thing that God commanded them to do through Scriptures, the authorities became incensed. These people, The Anabaptists, refused to swear oaths, they refused to kill anyone, therefore they refused to help fight wars. But worst of all, they refused to baptize their children.

Anna, the young woman in SWORD OF PEACE, lost her Anabaptist family to persecution and fled to Amsterdam. But she was no safer there. Soon, she is involved with the Anabaptists, or Brethren, as they preferred to be called. Even though she is still with the Catholic church, her life is in danger because of her interaction with the unwanted sect. She knows if the authorities find out that she knows the Anabaptists but hasn't reported them, her life is in danger. But how can she possibly turn in Maeyken, and her husband, who are her close friends?

In this mad world, Anna has to make up her mind before they find out about her, but it's an impossible decision to make!

You will love this fast-paced, historical thriller/ suspense/ romantic fiction!