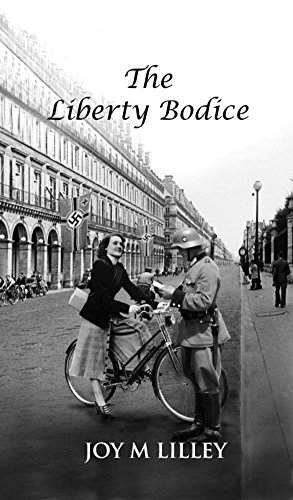 about this book: This story tells of the bravery, tenacity and courage of a young woman who joined the Special Operations Executive.[S.O.E.]in WW2. She is sent to Ireland from England with her sister as children to be brought up by an Aunt and uncle because their parents were stricken by poverty.

Gloria, our protagonist has a gift for languages,a talent required to fight for freedom. After a strenuous training she is parachuted into France and begins to fight alongside the French résistance.

After many successful operations one goes wrong and she and another agent are captured and sent to Dachau concentration camp in Germany.

Weakened by hunger and excessive toil Gloria miraculously escapes and makes her way back into France, mainly on foot.

On the way she meets and eventually marries a co-resistance worker, that does not go smoothly as the reader will see.

The inspiration for writing this book came after a visit to a factory where the liberty bodice was made, Market Harborough in middle England. Liberty being the theme throughout the story. The cover is made up of two imposed photographs and depicts Paris and its trials during the second world war.

It took two years to write. Much research went into the book for accuracy of description.

It is a read mainly for adults, as some vivid scenes of mans inhumanity to man are described.

I hope you enjoy the book and a review would be much appreciated.