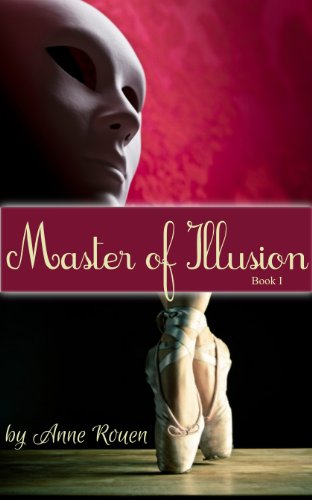 Book: Master of Illusion Book One by Anne Rouen

about this book: Master of Illusion Book One was the winner of the Silver Medal for Modern Historical Literature Fiction in the 2014 Global Ebook Awards and is popular in Fan Fiction forums.

The book was partly inspired by Andrew Lloyd Webber's musical, The Phantom of the Opera,
and is a story of murder, magic, music and obsession that follows the lives of unlikely childhood friends, Angel and Elise, set to the backdrop of 19th century France.

Angel's obsessions define him: his emulation of the Phantom of the Opera coupled with a latent dark side develop into a fervent passion for a young soprano. Elise assumes the role of his protector and nurturer—she is his rescuer—but soon learns to wield her own powers of persuasion and contrivance.

In trying to reach the pinnacle of operatic success, Angel and Elise are faced with the challenge of defining justice, love and self-acceptance. Through abandonment, Angel knows only one form of love— obsession; and Elise, whose purity lies in ruins at the hands of evil, is raped of her capacity for romantic love.

What fans have said about Anne Rouen?

• "This is one of most AMAZING book series I have ever read in my entire life!" ~ Anna C, Google Play

Read more reviews like this on Goodreads, Amazon and more!