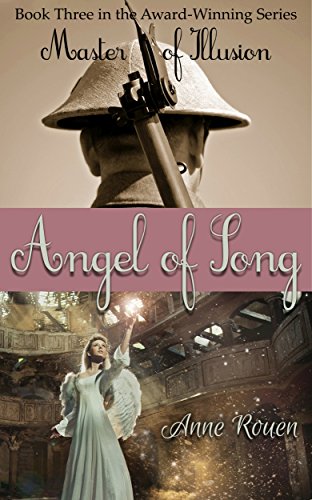 about this book: This, the third novel in the Master of Illusion series, was winner of the Bronze Medal for Modern Historical Literature Fiction in the 2016 Global Ebook Awards and is a historical romance set in the period of The Great War on the western front.

Angel and Elise—now known as Madame Dupont and the marquis de Bois—have become guardians and mentors to the Parisian debutante Angelique de Villefontaine.

Despite their best efforts to protect her, Angelique's life becomes a giddy whirl of performance and social engagement, mixed with the seduction of fame and adulation. She may have the voice of an angel, but she is not without her demons.

The marquis du Bois is charged with bringing the antiquated French Military into the twentieth century due to the growing political tensions sweeping Europe, while Angelique must embark on the most important tour of her career, only to be turned back by a murder that plunges the world into darkness.

Deeply affected by the horrors of war, Angelique rallies to help the wounded and inspire their troops with her most powerful weapon—her voice.

In the hell of the trenches, soldiers sacrifice their lives to hold their posts against insurmountable odds but find some strength in the power of their own Angel of Song.