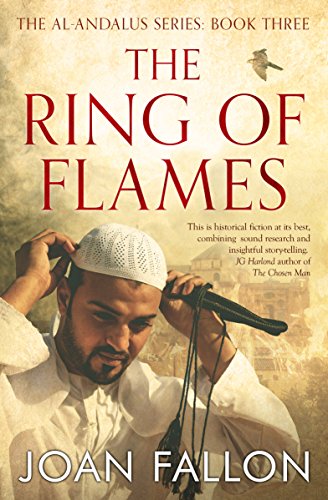 Book: The Ring of Flames - The al-Andalus series Book Three by Joan Fallon

about this book: This is the story of three brothers: Rafiq, a soldier, Qasim, a doctor and Ahmad, a falconer. They live in Córdoba at the beginning of the 11th century, a time of uncertainty, flood, disease and civil war. The rightful ruler of the country, al-Hisham II, the Omayyad caliph, is locked in his palace and isolated from his government and his people. When the Regent, al-Mansur dies, there is no longer a strong man to rule the country and one by one the pretenders for the throne make their challenge.

The three brothers find their loyalties in conflict when al-Hisham is thrown into jail and a new caliph is on the throne. Led by Ahmad they do all they can to help al-Hisham.

Finally al-Hisham is reinstated to the throne but the city is surrounded and Córdoba is under siege. As they struggle to survive in the besieged city, with no food, little water and no means of escape, the brothers come up with a plan. One way or another they must escape from the city but Ahmad refuses to go unless they take the caliph with them.