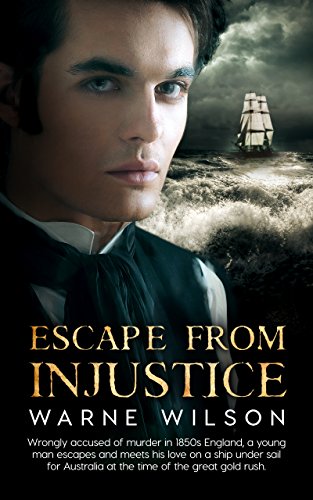 about this book: The spark for this saga was a story passed down in my family about a 'Remittance man' who, in his senior year at college was charged for the murder of a school friend in England in the 1850s. Because a witness was ready to testify falsely against him at a trial in London's Old Bailey, his father arranged his escape to a ship bound for Australia.

His name was John Lille. On board he met the shipmates he would partner with in a gold mine, and beautiful Irish girl Bernadette Ryan. Though both were inexperienced, the first tentative exchanges between them mature into a romance which becomes more intense as it carries them through the book.

After landing at Melbourne, occasional fleeting sightings of a stranger worry John; and the words of an unseen follower on a dark night worry him further; "You will pay John Lille".

As we read, the characters soon crystallize into people with individual personalities, a saga of adventure hard to put down, until the reality of death and of parting in the last few pages.

Praise for ESCAPE FROM INJUSTICE:
A reviewer writes; an atmospheric, gripping, and enjoyable read. Five stars.