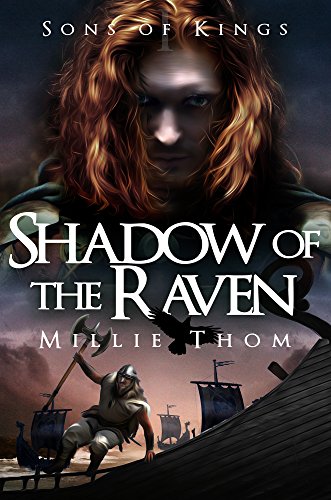 Book: Shadow of the Raven (Sons of Kings Book 1) by Millie Thom

about this book: Shadow of the Raven is the first book of the Sons of Kings trilogy. It is an historical adventure which takes us from the Anglo-Saxon kingdoms of Britain to the lands of the Viking Danes. The story focuses on the earlier Viking raids of the mid-ninth century and the threat they posed to the kingdoms of Western Europe. The book's title is intended to hint at this threat: the shadow hanging over the worried kingdoms, while the raven is the symbol of Odin, the highest of the Norse gods.

There are two main protagonists: Alfred, son of the powerful King Aethelwulf of Wessex, and the fictional Eadwulf, son of King Beorhtwulf of Mercia. Book 1 focuses on their early lives and their rocky roads to manhood. Both boys are the sons of kings but their lives become very different. Alfred suffers the loss of loved ones at an early age, but continues to learn the art of kingship at the successive courts of his father and elder brothers. In contrast, Eadwulf is captured in a Danish raid and thrown to a life of drudgery as a slave in the Danish lands.

For most of this book, Alfred is a very young child, so the story mostly focuses on the misfortunes and exploits of Eadwulf. Yet both boys soon learn the lesson that treachery can come from sources very close to home.

I was initially inspired to write this story some years ago when I lived in the market town of Wantage in Oxfordshire. Wantage is known as 'Alfred's Town' - the place where he was born. The statue of him in the little market place intrigued me and I've been interested in his life and fight against the Danes ever since. Due to spending many years teaching, as well as bringing up six children, the book didn't even start to take shape until I retired a few years ago. Books 1 and 2 are now on Amazon and I am currently writing Book 3. I spent several weeks in Denmark doing research at various historical sites and museums and attending wonderful 'Viking Moots' for this book, in addition to visiting numerous sites and museums in England. I also have a number of excellent text books on the period, two of them purchased in Denmark.

Perhaps the most interesting thing I learned whilst writing the book was just how far from home the 'Vikings' travelled and how incredibly successful they were. Their seamanship was to be envied, as was their navigational skills. What we hear about their savage nature also need to be viewed within the violence of the times as a whole. They were undoubtedly feared as raiders, but the Anglo Saxons had been no different in their behaviour during their years of conquering Britain, as stories about King Arthur illustrate. My research has also shown that there are good and bad in all peoples, and that the home life of the Vikings was one of peaceful hard work and resourcefulness.

I believe my books will appeal to anyone who enjoys an adventure story set in the past, with plenty of action and Viking daring. The underlying theme is of betrayal and revenge, but friendship and love also play their part, just as they have done in everyday life throughout time.

Shadow of the Raven will also appeal to those interested in the early life of Alfred the Great. Most works of fiction about him tend to focus on his years as king, whereas I have chosen to start my story earlier. Books 2 and 3 have been devoted to his later life and achievements, as well as Eadwulf's ongoing story.