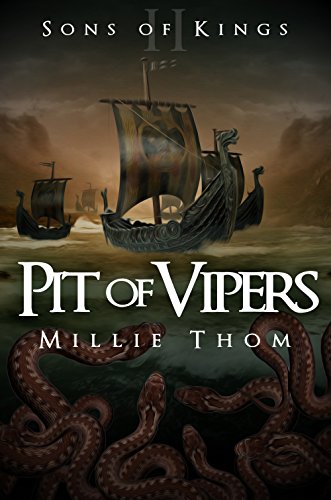 about this book: Pit of Vipers is the second book in the Sons of Kings trilogy, which is set in the mid ninth century, primarily in the Anglo Saxon kingdoms and Danish lands. This book continues the stories of Alfred of Wessex and Eadwulf of Mercia started in Book 1, Shadow of the Raven.

Whereas Book 1 focuses on the fictional Eadwulf, Book 2 brings Alfred more to the fore. In the first book, Alfred was still a child and much of his story is told through events concerning his father, King Aethelwulf, and older brothers. By the start of Pit of Vipers, Alfred is fifteen and events start to move him closer to the Wessex throne.

The trilogy was inspired simply by the fact that I once lived in Wantage in Oxfordshire, a town believed to be on the site of Alfred's birthplace. I was fascinated by his desperate battle to keep his kingdom, Wessex, during the devastating Danish/Viking invasion that saw the fall of every other Anglo Saxon kingdom. I felt that Eadwulf's story, particularly in Book 1 when he is a Danish thrall (slave), added an extra dimension to the trilogy, particularly regarding the characters and lifestyles of some of the Danes later involved in Alfred's battles. In the trilogy, Alfred and Eadwulf are connected through the marriage of Alfred's beloved sister, Aethelswith, and Eadwulf's treacherous uncle, Burgred.

It's difficult to say exactly how long it took me to write Pit of Vipers. When I eventually published Shadow of the Raven on Amazon in April 2014, I had already written half of Book 2. By December the book was finished and had been professionally edited. The illustrator was working on the cover while I was still writing, so there was no hold-up with that.

I really like the cover image of Book 2. I find it very atmospheric, and the illustrator has managed to capture the essence of the story. The image stems from an incident that occurs in the book and I feel it also fosters the idea of the invading Danes being like venomous vipers in the Anglo Saxon kingdoms. The same illustrator also produced a new cover for Book 1 in order to follow a similar style throughout the trilogy, and has now created one for Book 3.

The hardest part about writing Book 2 was the number of battles that took place as soon as the Danes gained a foothold in Wessex. It's difficult to describe so many battles without repetition, so I focused on the major ones – notably the famous Battle of Ashdown – and dealt briefly with the rest.

I did a great deal of research for the trilogy. I have a long list of reference books, and naturally, I also referred to online sites. Prior to writing Book 1, I had spent several weeks in Denmark, visiting historic sites and museums. I was also fortunate that my stay coincided with the famous 'Viking Moot' that takes place in Aahus over the last weekend of July every year. I learned a great deal about Viking goods, markets, ships and battle tactics over that weekend. Research is never really over, though. I find I still have to delve in again for particular scenes.

While writing this book I learned much about developing characters in fiction. Although Alfred the Great is a very well documented and debated figure, little is recorded about his actual personality, other than him being pious – like his parents before him – and a lover of learning in later life. We also know about his great sexual appetite in his youth. About his personal relationships with his wife and family little is said. So Alfred's character is of my own making, as it is in any other fictional work about him. He is still young in this book and I have given him what I believe to be a more personable character than the dour one presented in non-fiction works and sombre statues. However, I have been careful to adhere to actual historical dates and events, and even to those recorded aspects of his personality.

Whilst Alfred's story unfolds, Pit of Vipers also continues Eadwulf's quest for revenge. He is intent on showing no mercy to all those whose actions resulted in his seven years of slavery and the destruction of his home and family, as told in Book 1.

I would hope the book would appeal to anyone interested in adventure tales set in this period of Anglo Saxon history. Book 3 will see the threads of the two main characters and their stories eventually drawn together.