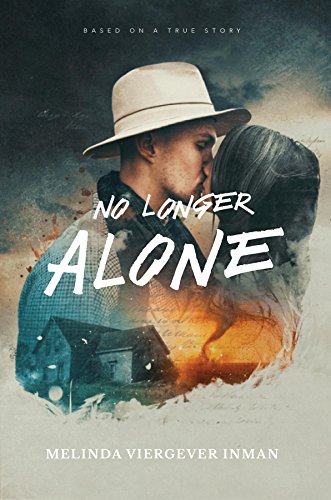 Book: No Longer Alone - Based on a True Story by Melinda Viergever Inman

about this book: I grew up in a sprawling family of storytellers descended from American pioneers. I’m Cherokee, and also Black Dutch, English, and Scots-Irish. The roots of all my stories were planted in the rich soil of the Oklahoma prairie and the Kansas River bottom. There I learned about family, loss, hardship, and perseverance. Pioneering, tragic death, and lifelong wounds wrought by disaster were all part of my heritage.

These captivated my imagination. Throughout my childhood I sat with the adults, a tiny audience, listening to their stories. That’s where I wanted to be. I put together the pieces and formed in my mind the reality of who my pioneer ancestors were as human beings. Later, I helped clean out their homes and sort their possessions when they passed away, finding more pieces of their lives—letters, beautiful negligee, personal Bibles, obituaries. From all of these clues, I built the characters of No Longer Alone.

No Longer Alone is a story formed from these verbal histories of my family, hours of research into the local history of 1913-1916, which is the beginning of WWI, and interviews of older residents and family who remembered how things used to be done.

When my great-grandmother Avery was a child, she rode in the back of the covered wagon as her family claimed land in the Cherokee Strip Land Run of 1893. The scenes of panoramic paintings and movie screens are real to me for I have heard the tale from a primary source—Avery herself. Hearing stories that are larger than life is breathtaking for an inquisitive child.

No Longer Alone is a novel—a work of fiction, not a biography, the tale of how Avery was courted by Prentis, the man who became my great-grandfather. This is a tale of their courtship and early marriage. The story begins in 1913 when Avery was a young woman of Cherokee descent in her early twenties. It was a time of racial prejudice. As she fell in love with the handsome young man who pursued her, the world went to war.

Life had been hard for that young man. Manhood had arrived prematurely for Prentis. At the tender age of fifteen, he had lost both his father and his confidence that God loved him. He grew up fast after that day, abandoning his education to take on the responsibility and hardship of supporting his mother and siblings.

While in his twenties, Avery reentered his life. She was intelligent with a captivating spirit. He found her irresistible. The audacity of attempting to court a well-educated woman in no way weakened his resolve. He was determined to win her heart. But many obstacles stood in their way: male competition, vicious gossip, Avery’s unspoken fears, and the ruin of his livelihood. How could Prentis win her? And if he did, how would they overcome their differences, the hard life on the Oklahoma plains, and a world at war?

One reviewer, Carol Johnson Parker, says of No Longer Alone: “Readers who come from a background of the homestead era and prairie farming traditions will recognize this story as an authentic portrayal of the dreams and struggles of a young couple as they forge a life together. The author’s descriptions of everyday life on a farm in the early 20th century are rich in detail. It is as if we were there, witnessing daily occurrences. The incorporation of historical events lends additional authenticity to the story.”