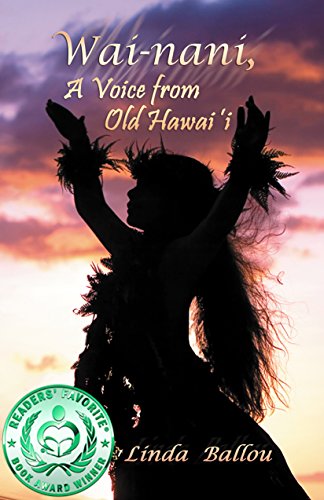 Book: Wai-nani - A Voice from Old Hawai'i by Linda Ballou

about this book: Wai-nani is Inspired by precocious Ka'ahumanu, the favorite wife of Kamehameha the Great, who rose to become the most powerful woman in old Hawai'i. She faced down death-dealing priests and was responsible for ending the 2,000 year-old kapu system that called for human sacrifice. While the United States was declaring its independence from England, Captain James Cook was sailing about the globe claiming territories for his majesty King George and Kamehameha was rising to power. This story told from the native point of view begins about 1765, prior to European contact, and ends one year before the Christian missionaries arrived at the shores of Hawaii in 1820 to spread the "good news."

The seed for the novel was planted while I was living on the North Shore of Kauai in 1978. It happened to be the bi-centennial year of the landing of Captain Cook in the Islands. I became interested in the history of the Islands and immersed into the Island culture. Western historians tended to describe the Hawaiians as savages who stabbed the good Captain in the back. I saw the incident as justifiable suicide. I took upon myself to tell the Hawaiian side of the story. Twenty years of intensive research later, I felt brave enough to the write this story. Ka'ahumanu, arguably the most influential woman in Hawaiian history had been overlooked entirely. I admired her athleticism, bravery and amazing grace. She stood over six feet tall and rode surf boards with her warrior husband. This story is a love song to the beauty of the Hawaiian people and their culture that was stomped on by missionaries who drove their traditions underground.

I shared my story with a Hawaiian scholar who told me I would have 200 year of bad luck if I published Wai-nani. How dare I speak for the Hawaiian people of old without asking permission from the ancestors? I was told my beautiful obsession with their culture would not be welcome. But, I had too much of myself invested in this prophetic story that I found so fascinating. I proceeded to publish and to my delight have received glowing reviews from Islanders and mainlander alike

Mahalo nui loa, Linda Ballou, for writing this glorious story. As a Hawaiian, born and raised, I loved the journey back into the days of old and the poetic way that you mixed fact, fiction, and legend. Wai-nani is a truly beautiful story, written with lush language that emotes the aloha of my people, while bringing our ancient culture and mysticism to life. Thank you so much for the careful research and the passion that you so clearly feel for Hawaii. Tori Eldridge-

Wai-nani is now available in audio format. I am grateful to my narrator Christine Padovan for taking the extra effort to get the pronunciation of Hawaiian words down. There is a glossary in the back of the book to help western readers with Hawaiian words. The story is told in first person. It is a delight for me to hear my words come back in such a poetic rendering of the people of old.

I look forward to reading a book that both teaches me and also takes me on a vacation. Linda Ballou's thoroughly researched, Wai-Nani: High Chiefess of Hawaii did both. I felt like I had just stepped off a boat onto the shores of Hawaii in the mid-eighteenth century.

The book chronicles the history of a woman who fearlessly challenged the confines of women's roles in Hawaiian culture at that time. Wai-Nani, wife of warrior husband Makaha, fights a personal battle to rise to a position of leadership, to become the "Mother to the island people."

Author Linda Ballou's thoroughly researched novel shines in its detail about pre-Captain Cook Hawaiian culture. She effortlessly weaves into her narrative details of the customs, gods, war campaigns, hunting, celebrations, spirits, taboos and flora and fauna of early Hawaii. The lavish colors of Hawaii literally jump off each page as she takes the reader on an inside tour of the famous islands. Reading about Wai-Nani's special relationship with the dolphins below the water is an additional treat.